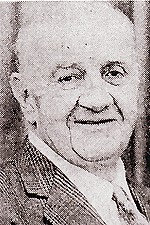 “If your actions inspire others to dream more, learn more, do more, and become more, you are a leader”

Throughout his career as a railroad worker, a volunteer, or a civic organizer, 2007 Branford Sports Hall of Fame inductee Edward Lonergan exemplified the sentiments of this presidential leader.

Born on August 19, 1904, in Branford, Ed attended Branford High School, where he graduated with honors in 1922.  Following high school graduation, he attended Stone’s Business College of New Haven and a year later went to work for the New Haven Railroad and remained  until 1961, when he retired on a disability.  During his years of service, he reached the position of chief clerk. Ed’s interest in youth began at an early age when he helped organize a Boy Scout troop at St. Mary’s RC Church in the 1930’s. The troop, under Lonergan’s leadership, grew to over 100 boys.

As a civic leader, tonight’s inductee was a charter member of  the Recreation Commission in 1951 and was known as the “dean of all recreation commissioners in the country ”.  He was cited by the National Association in 1964 for “outstanding contributions made to recreation in Branford and in the United States.” Ed served on the Hammer Field Committee, a group that managed the athletic activities of the field and worked in conjunction with Recreation Director and 1988 Branford Sports Hall of Fame inductee Joe Trapasso.

Ed became a charter member of the Board of Recreation when it was formed in 1951 and served on the board until his death.  He chaired the Branford Commission on Services for the Elderly.   Tonight’s inductee was the town’s Democratic Registrar of Voters. During World War II, he served on the local Selection Service Board and classified men for military service from the towns of Branford, East Haven, and North Branford.   Ed was a volunteer firefighter for the M.P. Rice Company for many years and served as secretary of the group.

Sadly, Ed passed away on December 25, 1972.  On November 18, 1973, the Board of Recreation held a formal dedication and named the lounge at the Branford Community House, the “Edward B. Lonergan Lounge.”