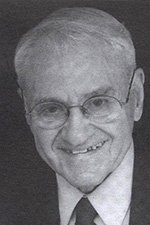 It has been said that you measure an individual in many ways: the originality of his compassion, the size of his heart and the depth of his feelings.  Now it can be written that 2005 Branford Sports Hall of Fame inductee Dr. John M. Gambardella succeeded in everything he attempted through these facilities.

Born in 1921, the oldest of three children of Paul and Rita Gambardella in the Grannis Corner section of New Haven, John’s early education was in the New Haven public school system.

In 1933 at the age of 12, he fell in love with the game of football. He spent the next four years trying to emulate his heroes, including 1989 Hall of Fame inductee Walter “Klinky” Klarman, a big , brawny, gutsy man.  “Gamby” as he was known to many, had the guts but his 5’3” 1o5 pound frame was anything but brawny.  The coaching staff at Hillhouse High School accepted his talent but decided for him that his size was too much of a detriment for such a physical game. Not to be denied, tonight’s inductee played the ever popular sandlot football but later focused on the coaching aspect of football. He developed a team, known as the Oakley Tigers, and began recruiting local boys to play.  He molded his players into a squad which became a team to reckon with in the East Shore Sandlot League.  John’s talent as a designer of formations and a master play caller propelled the Tigers into scoring galleries rarely seen in the late 1930’s and early 40’s.  In an era when scores of 6-0, 7-6, 12-6 were typical, the Tigers posted convincing scores of 77-0 and 47-0.

The dedication and drive for achievement that he instilled in his Oakley team became his mark of excellence. In 1941, World War II caused the 5-year old team to disband and 100% of its members joined the patriotic cause.  John went to the University of Tennessee as a pre-veterinary student.  While there, he was inducted into Lambda Chi Alpha Fraternity and played on the university’s wrestling team.

In 1942, John interrupted studies to join the Army Air Corp as an Aviation Cadet.  He learned he was one inch too short for pilot training but qualified for Bombardier and Navigation training.  He received his wings in both disciplines and was commissioned 2nd Lieutenant.  He was sent to the China Theatre  with another Tiger team: the Flying Tigers of the 14th Air Force.   After being shot down and parachuting behind enemy lines , John surviving a crash landing, earning  two Purple Hearts.  John recovered from his wounds and was sent stateside to Central Instructor School where he finished as an instructor to Chinese and Peruvian Cadets.

Following the war, Gamby returned to his pre-veterinary studies at the University of Connecticut and upon graduation,  was accepted to the Veterinary School at Oklahoma State University, graduating in 1953.  He interned for one year in Cranston, Rhode Island and opened up his own practice in East Haven in 1955.

In 1958, he chose Branford for the site of a modern animal hospital and purchased property on North Main Street, here he built the East Shore Animal Hospital, the first of its kind in Connecticut. For the next 44 years, he practiced veterinary medicine with the same enthusiasm, diligence, discipline and innovation with which he coached.  Over time he developed his practice into one of the top small animal hospitals in all of New England and in 1972 became the first in Connecticut to qualify for certification status in the National American Animal Hospital Association.

John received the United Way Gold Award and the Gold Plaque of Appreciation from Tufts University for his efforts in organizing a Connecticut Association supporting the efforts of the university to establish New England’s first regional school of Veterinary Medicine.  In 1988, he was the first Oakley Tiger to receive the East Shore Sandlot League’s Annual Football Award.

He had his wife Nina became amateur competitive ballroom dancers, competing throughout the United States and Canada, Italy and Hawaii. As Regional Vice President, John established the first Connecticut chapter of the United States Amateur Ballroom Dance Association, which is now recognized as Sports-Dancing and is a qualified member of the International Olympic Committee.

Tonight’s inductee is the father to seven children: sons, Paul, Jack, and Mark, and daughters, Andrea, Mary and Nina and pre-deceased by another daughter, Lydia.