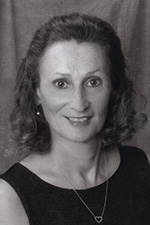 During the mid 1960’s, followers of Branford High School female sports witnessed an individual who demonstrated athleticism, distracted opponents, and developed leadership for others to emulate.  That person came in the form of 2002 Branford Sports Hall of Fame inductee Dorothy “Dody” Blackstone Criscuolo.

Born to Paul and Dorothy Blackstone on July 12, 1950, Dody lettered in field hockey, volleyball, track, and basketball while attending Branford High School.  As a member of the field hockey team, she was coached by fellow Sports Hall of Famer Virginia Moessmang (1990) and was a captain in her senior season.  She lettered all four years and captained the volleyball and track team in addition to playing forward on the Hornets’  basketball team. Dody was a member of the 1966-67 undefeated B.H.S. Girls Basketball Team, which went 7-0, defeating North Branford (26-24), North Haven twice (49-27), (55-28), St. Mary’s (31-29), Hamden (35-22), Mercy (28-26), and Amity (50-18).  Tonight’s inductee was awarded the Top Junior B.H.S. Female Athlete Sweater Award in 1967 and the Special Blazer Award as Outstanding Female Athlete during her senior year.  Using her athletic prowess and speed for the track team, she won first-place in the 1968 High Jump Class M State Track and Field Championship.  Dody served in the Youth in Government program as Recreation Board Director.

Dody continued her passion of field hockey as she became Branford High School’s freshman coach from 1984 to 1993 for Branford Sports Hall of Famer Cathy McGuirk (1994).

Within the community, Dody has been a coach in the Branford Senior Division Girl’s Softball League and an officer for the league.  She played softball as a first baseman and outfielder for the Branford Recreation Department’s Women’s Morning League, a teammate of Hall of Famers Toni Cartisano (1993)  and Cathy McGuirk. She also played for Baron’s Drive-In  coached by Dennis Barone,  a teammate of Andrea Amendola and Karen Amendola of Amendola’s Trucking,  teammate of Nancy Hyde and  Gina Carafano of the Eel Pot, and a teammate of another Hall of Fame inductee Adele Weted (1991) of Weted’s Barber Shop in the Summer Softball Evening League.

Married to her husband Paul , Dody is the mother to two children – son, Brian, whose wife Martha, was a former freshman field hockey player under Criscuolo’s regime, and daughter, Julie.