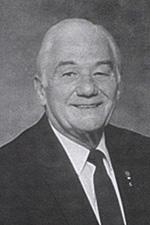 Born in New Haven, Connecticut, on August 5, 1926, the son of George and Josephine (Dixon) Erickson, Don and his brother, Ken (1997 Hall of Fame inductee), and family moved to Branford in 1938.  Don attended Branford High School and was a member of the boys basketball team.

In his senior year, Don was on the Hornets squad which was coached by 1988 inductee John E. Knecht Jr. This team also included on its roster, Joe Orsene (1989 inductee), Bill Hinchey (1991), Henry Olejarczyk (1998), and Steve Pauk (1999).  During that season, Branford captured the Housatonic League title and won 14 games, while losing three in their regular season.   After two tournament wins against Windsor (35-27) and Wallingford (37-33), the Hornets faced East Hartford in the Class B Finals, and after leading all the way, lost a heart-breaking game in the final seconds, 39-37.  He graduated in the class of 1944 with Hall of Famers Joe Orsene, Bernie Page (1989 inductee) and Steve Pauk.

He joined the United States Navy in June of 1944 and was shipped in July of 1944 to Sampson Naval Training Station in upstate New York. Don served with the U.S. Navy Seabees, 144th Naval Construction Battalion, on Guam in the Marianas Island until June 1946.

After his discharge, he went on to play both baseball and football at Milford Prep School,  and attended one year of college at the University of New Haven. In 1947, he joined the Southern New England Telephone Company (SNET), working in the plant department for 15 years, the training department for 5 years, and the engineering department for 18 years, before his retirement in July of 1985 with 38 years of service.

Tonight’s inductee is a member of the Branford Lions Club and served as President in 1970-71.  He has been awarded the highest Lions International Award, “The Melvin Jones Fellow” and the highest Connecticut Lions Award, “The Knight of the Blind”, both given for dedicated humanitarian services.  He is a member of the Masonic Order and has served two terms on the R.T.M. in Branford. He volunteers for Columbus House in New Haven, the Branford Food Council, and the Branford Blood Drives and attends Trinity Episcopal Church in Branford, as well as serving many years on the Young Park Commission and the Branford Sports Hall of Fame committee since its inception in 1988.

Don married the former Valerie Morawski in April of 1949 and they celebrated their 50th wedding  anniversary in April of this year.  They have three children: Wayne, Donna Johnson, and Christine Anderson. Don is the grandfather to nine granddaughters and one great grandson.