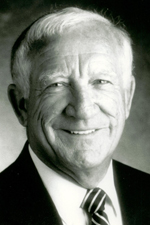 As opposing football teams visited the Branford Hornets from 1955 to 1964, the road trip began with the sheer confidence that they would leave victorious.  However, once the opposed arrived, the sentiment of a comfortable win became a feeling of uneasiness and doubt.  The reason for the swift mood change started with the stern jaw, the confident look, and the successfully planned strategy from Branford High School football coach and 1992 Branford Sports Hall of Famer, Dominic Cote.

A coach with Branford for nine seasons, Cote compiled an overall record of 13-10 from 1955 to 1957. Dominic’s 1958 squad accomplished something every team dreams about-going undefeated.  With 1991 Branford Sports Hall of Famer Jack Cirie and fellow inductee Tom Murray a part of this unit, the Hornets outscored opposition 184-30, allowing only Derby, Lyman Hall Southington, Shelton, and East Haven six points each.  Cote, that year, coached a group of players who recorded four shutouts their skipper, 25-0 versus North Haven., 14-0 against Seymour, 13-0 to Cheshire and facing Amity, a 33-0 landslide win.  Soon after the last regular season game, Branford was crowned State Class “M” champions.

Before Cote coached the Hornets, he was a three sport athlete at the University of Vermont.  As an All-Vermont baseball player in 1951, he logged a .429 batting average, and in one game versus Maine, hit the cycle (single, double, triple, and home run.)  He also lettered in football for three seasons and hockey in two.  To this day, Cote still holds the Vermont record for punting average for one season (41.2 yards per punt in 1949) and in a career (37.5 yards.)  On October 11, 1991, Dominic was inducted into the 23rd Annual University of Vermont Athletic Hall of Fame, recognized for his “significant contribution to the university through participation or involvement in athletics.”

Cote retired in June of 1985 after having taught at the secondary level for 36 years and served as a Town Selectman in Branford from 1985 to 1987.

Married to Annette Richard Cote since September of 1951, Dominic has two children, Colleen Cote McDonald, an elementary school teacher in Branford and a son, Stephen Cote, a Major in the United States Marine Corps.

Cote reflected on what his 1992 induction to the Branford Sports Hall of Fame means to him.  “I think its above and beyond my expectations.  I think it’s probably the biggest day of my life as far as in Branford is concerned.  This is my day in the sun.  I sure appreciate it because the kids did it for me.  I had not much to do with it.  Remember one thing, the players can make a coach but the coach can’t make the players,” said Cote.