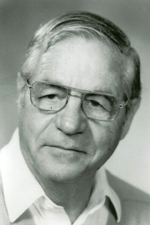 When the time arose for improvement to recreation facilities and programs for children, 1996 Branford Sports Hall of Fame inductee Dom “Minic” Giordano always exhibited passion in his efforts to make the town of Branford a proud, enriched, successful, shoreline community to all.

Born in Branford on December 26, 1914, Dom was one of ten children consisting of nine boys and one girl.  He attended schools within the Branford system before making his claim to the town and to the Branford Recreation Department.

Dom served on the new Community House building committee and also contributed to the development of Foote Park and the John B. Sliney Park which has four ball fields and a soccer field.  Through his dedication and dynamic leadership qualities, the Warren Sampson Little League Park at Indian Neck was built.  He was also instrumental in rebuilding the baseball diamond at Hammer Field, putting up four backstops and building the outdoor basketball court and field house.  He personally took charge of setting up the model playground at Hammer Field and assisted in the construction of the Damascus School Buddy League Field and the Branford Hills Buddy League Field.

In 1958 when the newly formed Little League was in dire need for a President, Dom took the position and through his strong, dedication, and dynamic leadership, the program began to flourish.  In 1965, he was honored by the National Recreation Movement in America and in the Town of Branford.

Tonight’s inductee was valuable in setting up a recreational program for Branford’s beloved handicappers and special education students which has been used as a model for the country.  In 1975, he was presented with the National Tommy Wilson Award and in 1980 he was honored by the Special Education’s Group for his outstanding service.

Dom was the guiding light behind the construction of Veteran’s Memorial Park on Brushy Plain Road which has won national acclaim for programming and maintenance.

For many years, Dom was Chairman of the Youth Activities Committee for the Elks Club in Branford and through his efforts, the Branford Elks Club was voted to have the outstanding Youth Program in the state.  He also served as Chairman of Dinners that annually honored theBranford High School basketball and football teams.

“This award is recognition of things that I did and accomplished in the town.  It means a lot to me in that I am satisfied in what I did for the kids in Branford,” said Giordano.