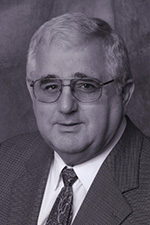 During the 1950’s, the name Dick DeSarbo was synonymous with Branford baseball.  Born to John and Frances DeSarbo on December 7, 1940, Dick’s athletic prowess was obvious at an early age.  Throughout grade school and subsequent to the inception of the Little League in Branford (co-founder in 1950 by Hall of Famer Stu Clancy), his pitching and hitting abilities were instrumental in numerous team championships.  During his three year Little League career, he batted well over .600, was selected to the All-Star Team and chosen Most Valuable Player in each year.  Little League moguls of Connecticut rated Dick as one of the finest natural hitters they ever witnessed.  In 1954, he was the key player on the Branford Pony League Team that won the State Championship and led his team to the finals of the Eastern Regional Tournament.  His extraordinary baseball skills were such that, as an eighth grader and throughout his high school career, he was asked to play for the Branford Townies of the famed Middlesex League, truly a remarkable feat considering that he competed with college players and former professionals while sharing the spotlight with Hall of Famers Dick Jackson, Barry Royden, Stan Sokolosky, Pete Ablondi, Blake Lehr and Jack McGowan.

A graduate of the Branford High Class of 1958, Dick was a three-year varsity first baseman for Hall of Fame Coach Jerry Crotty and compiled a batting average well over .400 during his career.  Elected Co-Captain in both his Junior and Senior years, Dick led his team to a tie for the Housatonic League Championship.  In a time when Branford High School baseball was in a golden era, Dick was generally acknowledged to be the premier player in the Greater New Haven area.  Known for his classic swing and long powerful drives, he earned a reputation as a feared hitter.  Sportswriter and fellow Hall of Famer Bill Ahern referred to the young teenage DeSarbo as “a future major leaguer”.

During high school, Dick’s academic achievement and exemplary leadership paralleled his performance on the athletic field.  He served as President of his class, a member of both the Student Council and National Honor Society, and Boy’s Sports Co-Editor of the class yearbook, while ranking fifth in his class academically.  Subsequent to his graduation, Dick was signed to a professional baseball contract with the Baltimore Orioles by Hall of Famer Frank McGowan, who had a lifelong desire to sign a prospect from his old home town. Dick played in the Baltimore minor league system for three years, where, in 1959, he was named to the Alabama-Florida League All-Star Team as the starting first baseman.  During the off-season he matriculated as a part-time student at the University of Connecticut School of Business.

After the 1960 season, Dick decided to return to the University of Connecticut on a full-time basis and complete his undergraduate studies, graduating in 1963 with a B.S. Degree in Accounting. An honor student, he was the recipient of a scholarship award presented by the Connecticut Society of Certified Public Accountants.  Subsequent to completing his active military service and while employed as a tax accountant with the international accounting firm of Ernst & Young, Dick obtained his MBA in Taxation from New York University in 1966.  In 1971, he received his J.D. from the University of Southern California School of Law, graduating in the upper ten percent of his class and receiving both the prestigious Business Law Award presented by the California and American Associations of Attorney-CPAs to the outstanding senior in business law and the American Jurisprudence Award for excellent achievement in the study of taxation.

Dick returned to New Haven to pursue a successful legal career, being admitted to the Connecticut Bar Association in 1971, and became a Principal in Bergman, Horowitz, Reynolds & DeSarbo, P.C., a firm renowned for its tax planning expertise.  In addition he was admitted to practice before the United States Tax Court and the United States District Court for the State of Connecticut where he was recognized for his special service as a Special Master.   In 1988, Dick established DeSarbo, Burnham & Reichert, P.C., serving as its President and Treasurer until his retirement in 2000. Throughout his distinguished legal career, Dick was a highly sought-after speaker, widely recognized as a respected expert in the fields of estate and retirement planning.

Now living in Guilford and married to his wife of thirty years, Beverly, they are the proud parents of a daughter, Julie.