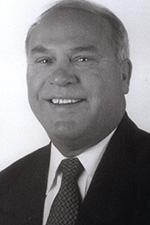 His passion for athletics and his loyalty to the Branford community provided a legacy for many to follow.  As a four-sport athlete, a volunteer, and as a licensed sports official, 2002 Branford Sports Hall of Fame inductee Dennis G. Swirsky lives for Branford and its sports.

Raised by lifelong Branford parents, the late Mary and Dominic “Mink” Swirsky ( an inductee of the Branford Sports Hall of Fame  in 1990), Dennis attended Branford High School from 1966 to 1969, where he was a four-sport athlete in football, basketball, baseball ,and golf.

As a member of the Hornets football team during his freshman and sophomore seasons, Dennis was the junior varsity quarterback until a broken wrist in a game against North Haven ended his season.

The injury did not stop Dennis from excelling in basketball. As a four-year player, including three as a varsity member, he played for 1989 Hall of Famer Stan Petela and 1992 inductee Tom Murray. “Mink” as he was also nicknamed, was part of the 1967 Housatonic League championship team. With a record of 18-2 and two wins in the C.I.A.C. Class B Tournament, Branford lost in the Semi-Final game to Abbott Tech, 70-61.  Dennis played with Hall of Fame members Jerry Schmitz (’96), Ted Kaczynski (’99), Joe Roberti (’99), and Gary W. Lipkvich (’01).  During his junior year, Dennis was part of the hoop team, which tied for first place in the Housatonic League and won 13 of 21 games.  Branford captured key victories during the tail end of the season against the likes of Shelton (68-58), Cheshire (50-45), and East Haven (58-53).  The Hornets topped Penney (56-48) and Simsbury (70-59) in the Class “A” tournament, before losing to top-ranked Wilby 66-62.  In his senior season, “Mink” led the hoops squad as a quad-captain to a spectacular 18-2 record and another Housatonic League title, losing only to Cheshire 56-54, in the regular season, and to finalist East Catholic, 51-40, in tournament action.   Dennis finished 6th  in All-League balloting  and was Honorable Mention All-State. In baseball, Dennis played two years on the varsity squad as a right fielder, third baseman and pitcher. In his junior year, Dennis’ passion for golf  caused him to leave baseball and become a member of the varsity high school golf  team during his junior and senior season and was elected co-captain in his senior year.

Following high school, Dennis attended Adelphi University, where he was a varsity member of the golf team. He was the only freshman in 100 years to win the New York Metropolitan Intercollegiate Golf Tournament.  He was named captain-elect as a sophomore.   He also played varsity basketball as a freshman and sophomore.

As an early admission transfer in 1971 to the University of Florida, tonight’s inductee was a two-time member of the NCAA Division I golf championship team in 1972 and 1973, playing with future golf professionals Andy North, Gary Koch, and Andy Bean among others.  He earned his degree requirements for a BA in Psychology. Dennis later attended Southern Connecticut State University, graduating in 1977 with a four-year degree in Nursing.  He has been a medical sales representative for 20 years and was a three-time Sales Representative of the Year – one with Behring Dade Diagnostics and two with Syva Company.

Within the community, Mink has been unselfish in giving unlimited amount of time to youth activities . He was a coach for Branford Youth Travel Soccer, Travel Basketball and Youth Baseball for many years.  He was a strong member of the Branford Little League Board, taught golf for the Branford Recreation Department, an Amateur Softball Association umpire for 29 years and to this day officiates the Branford Recreation Department’s adult softball leagues.  As a basketball official, Dennis has volunteered his time for numerous Frank J. Kinney Sr. Boys Basketball Tournament games and for the Joan G. Bradley Girls Invitational Tournament.  For 28 years, he has served as a licensed referee on IAABO Board # 10.

He continues his love for golf and is a founder and driving force for the William Rousseau Jr. Golf Tournament, which helps the Branford High School community.  He has been a multiple winner in the Branford Recreation Department’s Fritz Petela Open, a multiple guest winner in many area tournaments, a club-champion at the Madison Country Club in 1979, and runner-up in the Yale Golf Association in 1980 and in 1981. He is a 15 year varsity golf coach at Branford High School.

Married to his wife, Carol Vecchio Swirsky for 19 years, Dennis is the father to son, Stephen, and daughter, Brittany.