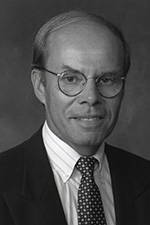 “In order to achieve your goals, you have to work hard and give tremendous effort both in the classroom and in the game.”

Even before he defined his philosophy as a successful basketball coach, 1997 Branford Sports Hall of Fame inductee Dave Maloney showcased his future potential as a three sport athlete in high school and as two sport athlete in college, leading up to his prominent attributes as a Branford High School teacher and administrator.

As a student at Branford High School, Dave played basketball, golf and cross country.  During his sophomore season, he was a member of the undefeated cross country team which won the Housatonic League.  The following year, the Hornets won yet another Housatonic League title, this time achieving a 7-3 record.  That year, Dave competed with 1996 Branford Sports Hall of Famer Jerry Schmitz.

In basketball, he was a member of the Hornets squad which went 15-5 and reached the second round of the Class B State Tournament defeating Windsor Locks, before losing to Abbott Tech in a close battle.  During his senior year at Branford, tonight’s inductee played a key role as co-captain for a team which recorded a 16-4 season playing for 1989 Hall of Fame inductee Stan Petela.  Dave was awarded the Savitt Sportsmanship Award that season.  He was also a four year participant of the Boys Golf Team and as a captain in his senior year was named Outstanding Golfer at Branford High school.

After graduating with honors from Branford in 1966, he attended the University of Vermont, where he played freshman football and led the team in interceptions as a defensive back and was a member of the golf team for four seasons which captured winning records in match play for all four seasons.

Following graduation from Vermont in 1970 with a Bachelor of Science degree in Zoology and Chemistry, Dave became a science Teacher at Walsh Intermediate School from 1972 to 1983,  and a Biology Teacher at Branford High School from 1983 to 1989.  While there, he was the Hornets girls basketball coach for 10 years (1979 to 1989) and held a winning percentage of .740.  During his tenure, his basketball squads won back to back Housatonic League titles and CIAC State Titles.  In 1983, Branford was undefeated at 24-0, won the Class L State Championship, earned the number five ranking nationally in Parade Magazine and the number eight ranking in the USA TODAY poll.  Branford did not skip a beat the following year, as Dave headed the Hornets to a 24-2 record, a second straight Housatonic League Championship as well as a repeat Class L State title.  During this run, Dave’s teams won 45 straight games at home, had more assists, more steals, more blocked shots than any previous Hornet squad.  For his accomplishments, he earned the New Haven Board #10 Phil Casman Sportsmanship Award in 1983, the New Haven Tap-Off Club Coach of the Year in 1984, and the Connecticut High School Coaches Association Coach of the Year in 1986.  As the Branford High School Golf Coach from 1986 to 1988, he held a .670 winning percentage and in 1988, his team captured the first league title in school history going 18-1.  As an assistant l from 1989 to the present, he has served as the CIAC Tournament director for Girls Basketball, CIAC Gold Committee-Appointed Chair, CHSCA Girls All-Star basketball Festival Committee and the CAS Board of Directors.

Married to his wife of 25 years, Deborah, Dave is the father to two sons, Derek (21), and Jeff (18). “This honor is a tribute to those students that I have been privileged to coach and work with during my career,” said Maloney, regarding tonight’s honor.