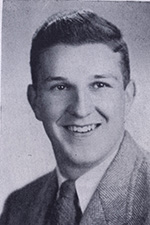 Known for setting an example as the “typical” senior in school, 2000 Branford Sports Hall of Fame inductee Dave Clark  was much more than that when it came to his accomplishments as a three sport athlete, a dedicated student, and an outstanding community person.

Born in 1927, Dave attended Branford High School and played football, basketball, and baseball.  During the 1943-44 season, Dave was part of the Hornets basketball team as a guard, which was under the direction of head coach and fellow Hall of Fame inductee John Knecht (1988).  After winning 14 games in the regular season, Branford claimed the Housatonic League title, before losing to East Hartford in the Class “B” State Finals, 39-37.  Dave  was a teammate to fellow Branford Sports Hall of Fame inductees, Bill Hinchey (1991), Steve Pauk (1999), and Don Erickson (1999).

The following year,  the Hornets were led by new coach and inductee, Warren Sampson (1992).  Branford won the State Class “B” State Championship  defeating Derby in the finals, 31-25.  In the regular season, the Hornets ran second to “A” class Stratford in the Housatonic League.  During that season, opponents marveled at Dave’s ability in passing, shooting, and floor play.   Hall of Fame inductees Bill Mischler (1993),  Jim Murphy (1995),Robert Geier (1996), Ken Erickson (1997), Henry Olejarczyk (1998), Tony Proto (1998),  and  Charlie Lake (1999) were all teammates that season.   As a member of the Class “B” Championship baseball team in his junior year, Dave assumed the captain role in his senior season as the third baseman.

Voted by his class as “Best Alibier”, “Most Popular”, “Most Sociable”, “Class Flirt”, “Best Actor”, “Faculty Joy”, and “Class Arguer”, Dave later attended Yale University in the class of 1950 and was a captain of the baseball team and a class officer.  Following graduation, he was Class Secretary and Reunion Chair for many years. He worked as  a stockbroker  in Institutional Sales in New York and later  in Hartford for the last 18 years of his life. Dave  was the father to son, Tony, and daughter,  Susan and was  the grandfather of two. David passed away in 1991.