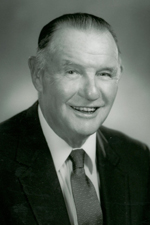 Nowhere in the history of Branford does a finer example of the ties of sports values and business acumen project then in the legend of Daniel Patrick Cosgrove.

No phase of the adventurous life of the Squire of Todd’s Hill surpasses his trials in the boxing ring. He amassed a record of 31 victories against 3 losses, avenging those defeats in later rematches. In his ring career which embraced the period between 1934 and 1937, Dan compiled 19 knockouts and was heralded as a hitter with a knockout punch in either hand. Two of his victories were over New York State’s welterweight amateur champion, Al Barbera of Portchester. Twice middleweight champion Eddie Elm of Connecticut decisioned Cosgrove but only by keeping the aggressive Branfordite at a safe distance.

The millionaire constructionman came out of Branford High School in the midst of the Depression, and worked as a lumberman for a dollar a day hewing ties for the railroad. He turned to boxing for the extra money and as a rank amateur he appeared in smokers, carnivals and at country fairs where he received a dollar for each minute he stayed with the roustabout foes. Frequently Dan boxed twice a night and five nights a week.

In time he enlisted in the Elm City on Meadow Street, New Haven, where he trained with professionals and used six-ounce gloves instead of the 12 oz. mittens of former times. The extra money made the difference worthwhile to the heavy puncher. In the ring he fought under the name of Maxie Grove, the first name for the heavyweight champ Max Bear and the second merely a shortened form of his family name. Dan’s style struck up friends wherever he fought. Boxers have genuine respect for one another inside the ring. “It’s one on one,” Dan says, “Nobody blocks for you up there under the lights – when rivals hug after a decision, it is with gratitude that they are still alive.”

After he hung up his gloves, with $400 and a used bulldozer, Dan started his construction business, which in turn led to many philanthropic gifts to hospitals, churches, schools, and other worthy charities. Dan never said no to helping a deserving organization such as the little league program here in town. Over 30 years ago he used his equipment to carve out the existing field next to Foote Park that’s used each season every night by hundreds of future Hall of Famers. There also is a team each year sponsored by the man whose company bears his name.

Dan, who was named 1984 Citizen of the Year, still lives in the town he loves so much, near his family and many fond memories of the friends he had me in the ring.