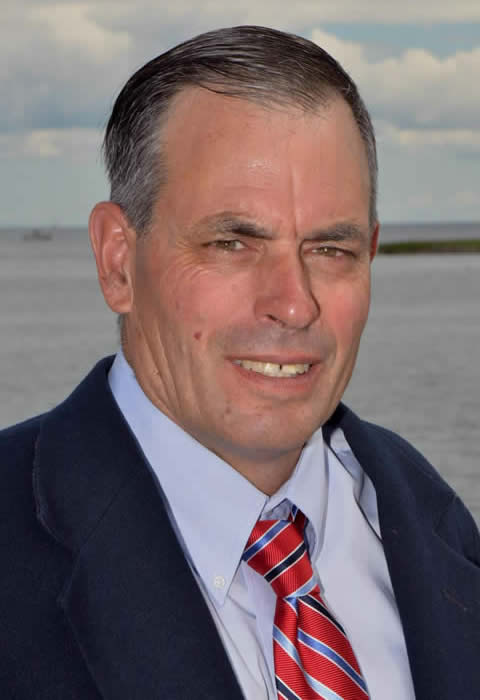 Donald J. King (DJ) is a life long resident of Branford. He is a 1974 graduate of St. Mary’s School, 1978 graduate of Branford High School, and a 1982 graduate of Clark University where he majored in Economics and Geography. Currently, DJ is the Captain of the Kory Alexander commercial fishing vessel, and a local lobster fisherman, oyster farmer and owner of King Lobsters. He is a board member with the Connecticut Seafood Council and a consultant to UCONN’s Sea Grant Program.

At Branford High School DJ was an honor roll student. He played football, basketball, and track his freshmen year earning his varsity letter in both basketball and track. As a freshman, he was a member of the 1975 Housatonic League Championship team. Sophomore year he averaged 11 points per game/ 5 rebounds per game, and junior year 16 points/ 7 rebounds per game. As a junior, the Hornets went 18-2 and again won the Housatonic League Championship. In 1978, DJ was a senior captain, the Hornets went undefeated 20-0, won the Housatonic league Championship, with DJ averaging 20 points per game and 8 rebounds per game. DJ was selected as an All Housatonic League player his junior and senior year earning All State honorable mention his junior year and second team All State his senior year. DJ was selected as a McDonald’s All American player his senior year and selected as a member of the New Haven Tap Off club first team All County. He reached his 1000-point milestone senior year with a win against Derby and had career high 42 points in a regular season game.

A four-year varsity track team member, DJ participated in the high jump, long jump, triple jump, and the 440 and 880 events. He placed second in the state in the 880 his senior year. He had a personal best time of 1:56.8. As a junior, he placed in the top ten in the state decathlon meet where he pole-vaulted 12 feet 5 inches. While heavily recruited for his track skills, DJ chose to follow his passion for basketball at Clark University. He was a member of Clark’s 1979-1980 National Division 3 Elite Eight Championship team. He suffered a foot injury his sophomore year which ended his college basketball career.

DJ is Branford’s longest consecutive adult men’s league player and the all-time leading scorer with 10 league team championships. In 2008, he was recognized by the New Haven Register as one of the Top 25 Connecticut players. He has served for the past 16 years as a volunteer coach and team sponsor with the Branford Youth Soccer Program, Branford Little League Program, Branford Rec. and Travel basketball program, and assists with record keeping and scouting for the Branford High School basketball and baseball programs.

Married to his wife, Sue, for 23 years, the Kings have three children – Alex, 19 who is a freshmen at Clark, Kory ,16, who is a junior at Branford High and Karly, 12, a 7th grader at Walsh Intermediate School.