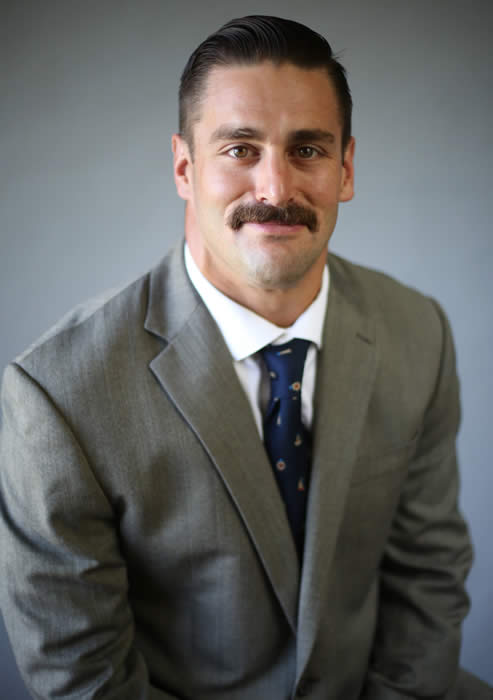 Tough, tenacious, and driven are just a few words that best describe Craig Kenney as an elite athlete at Branford High School. Talented and versatile, Kenney earned a total of eleven varsity letters in football, basketball, baseball, and track and field. A diligent worker, he had the uncanny ability to motivate his teammates and to inspire them to perform at a higher level.

Craig was born as the youngest of three sons to John and Katherine Kenney. As a child, he admired his brothers John Jr. and Mark. Craig followed his siblings to nearby parks to participate in pickup basketball and football games. Often, he was the youngest player which helped him to develop confidence and resiliency.

In the fall of 2001, Kenney joined the Hornets football program. Within a few weeks, he went from a member of the freshmen team to a starter on the varsity squad. By the time he graduated in 2005, Craig was one of the most decorated athletes in the history of Branford High School.

Playing for Hall of Fame coach Gary Gravina, Kenney started for three seasons at quarterback and linebacker. As a senior, he was a captain and he led his team to a 11-1 record. The Hornets only loss that season was to Pomperaug in the State Class MM Championship game. Statistically, that year, Craig passed and ran for over 2,900 yards and scored 38 touchdowns. In total, Kenney earned All State and All SCC honors following his sophomore, junior and senior seasons. He also was a two-time member of the New Haven Register All Area team. Coach Gravina stated, “ I have been blessed to have coached high school football for thirty years. During that time period, Craig Kenney is the most complete player that I have seen. I was incredibly fortunate to coach him for three years. In my eyes, he is the greatest and most dominate football player in the history of Branford High School.”

On the hardwood, Craig started as a forward for four seasons under legendary coach Jake Palluzzi. During his senior season, he was selected by his teammates as a captain. In the spring, Kenney started for two seasons on the baseball squad. Furthermore, he lettered in track and field as a junior. As a result of his achievements, Kenney was honored by the New Haven Register as the 2005 All Area MVP.

Following high school, Craig was offered a full football scholarship at Northeastern University. He was a four-year starter at linebacker for coach Ralph “Rocky” Hager. Kenney was a captain for the Huskies as a junior and senior. In 2009, he graduated from the prestigious institution with a degree in Human Services.

In 2013, Craig became the proprietor of Branford CrossFit Gym. Five years later, he established South Madison CrossFit with his close friend and business partner A.J Alessi. Kenney enjoys the camaraderie of the gym. Today, the athletes who train at his gyms are of all ages including members of local high school teams.

Remarkably, while raising his young family, and running his businesses, Craig has participated in regional, national and world CrossFit tournaments. In 2014, he advanced to the CrossFit Games held in California where he finished eleventh in the world. Four years later, Kenney returned to the CrossFit Games where he again performed well finishing twenty seventh worldwide.

In his personal life, Craig married his wife Marta in 2011. The couple have two sons named David and Wade and the family resides in Branford.