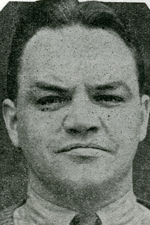 Pride, tradition, and determination engraved the life of 1993 Branford Sports Hall of Famer Chet Tisko in many ways including his success in athletics and in business.

Born to Polish parents on Christmas Day 1905, Tisko was a long-time Branford resident along with his three sisters and one brother.  He attended local schools where he established an outstanding mark in scholastic sports, especially football and bowling.

What was considered his first sports love – football – Tisko became involved in the sport in a most original fashion.  While working on a backwoods farm, Tisko was discovered by two football players, one of them being 1988 Branford Sports Hall of Fame inductee Dave Hylinski.  The pair soon went back to the farm with a football in hand and in the midst of tossing the pig skin with Tisko, soon found the discovery of a fast, brainy, tough-going athlete in Tisko.  Already a halfback on the Branford Laurels team, Hylinski went to 1990 Branford Sports Hall of Fame inductee, Coach Bob Kelly told him that he had a great prospect in the waiting.  When Kelly spotted Tisko, he was sure and the training began immediately.  While a member of the Laurels football team, Tisko was part of semi pro championships from 1922 through 1926.  He starred on the squad for 15 years as a defensive guard and tackle.

Tisko started his prosperous bowling career in 1924 at the Branford Bowling Center, where he attained a season high average of 202.  Throughout his career, Tisko maintained a steady 185 plus average as the anchor man of the Branford Bombers.  As members of the new Haven City Pin League, the Bombers and Tisko were champions on many occasions.  From 1950 to 1956, they won seven straight league championships. Chet contributed a 248 game as his team rolled an 1154 team series which was an association record until 1970.  He has a career high game of 279 and a 717 set to his credit.

Chet was also a team member of the “Stage Door Grille” which traveled 170 miles round trip each Wednesday to Bowl Mor Lanes in New York City to participate in the Metropolitan Major League, where he was a squad leader for 21 years.  Tisko was involved in 17 American Bowling Congress tournaments, including a memorable event at Columbus, Ohio where Tisko rolled games of 203, 279, and 158 for a 640 set in 1950.  The 279 game was believed to be the highest game by an association member in an ABC tournament at the time.

Off the playing surfaces, Tisko was famous in the town of Branford for operating the legendary Tisko’s Market for 55 years, located at 401 Main Street.  Chet operated the store from July 28th, 1924 to April 29th, 1979.

Tisko passed away on June 29, 1984, the victim of a fatal car accident.  He was married to the late Mary R Tisko, a well-known Branford educator.

“Chet would have said he didn’t deserve this award.  He loved sports so he played them.  He worked hard and played hard,” said his sister, Frances Tisko.