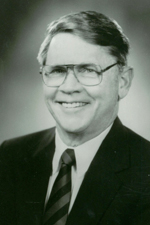 In each stage of his life, 1995 Branford Sports Hall of Fame inductee Chester W. Bloomquist unselfishly helped others in numerous ways-as an athlete teammate in high school and college, as an educator in the Branford school system and as a Recreation Supervisor for the Branford Recreation Department.  He is a valued and respected individual in the town of Branford for his numerous accomplishments in the community.

Born on June 14, 1926, in Gardner, Massachusetts, Chester attended Gardner High School where he participated in track.  As a member of the high school cross country team, “Chet” won a state championship, a second place finish in the Northeast region and third place in the National meet.  He graduated from high school in 1944 and later served in the United States Navy from 1944 to 1946 in World War II.  He pursued a Bachelors Degree in Health and Physical Education at Springfield College and competed on the volleyball team for three years while the sport existed as a club and he graduated in 1955.

In the fall of 1955, “Chet” became a Physical Education Teacher in the Branford school system and taught for 32 years (retiring in 1987).  He combined his athletic supremacy with the Branford Recreation Department.  Chester coached and supervised sports extensively for the school system and the recreation department including baseball, basketball and wrestling.  He also served as the Waterfront Director at a boy scout camp in the Catskill Mountains of New York State for 18 summers.

While with the Branford Recreation Department, “Chet” started the Branford Men’s Volleyball League which is still active today and growing into a Co-Ed League.  He also organized and played with the Branford Men’s Volleyball team which played in sanctioned U.S. Volleyball Tournaments in Connecticut, New York, Rhode Island and Massachusetts.  “Chet” took an interest in horseshoes and built counters and organized the Branford Men’s Horseshoe League for 12 years at Hammer Field and later at Foote Park under the lights.  He also played in the New Haven Men’s Horseshoe League for six years.  In addition, Chester served as the Pool Director at the Branford Intermediate School for 13 years.  In recognition of his hard work and leadership, a Men’s Volleyball Tournament was named in his honor (now in its 33rd year) and is held inside the Joe Trapasso Gymnasium each February.  “Chet” has also been awarded the Branford Rotary Club’s Community Service Award as well as having an athletic award earned by an eighth grade girl and boy each year at the Francis Walsh Middle School named after him.

Currently, tonight’s inductee directs a 28 mile walking trail around the perimeter of Branford and started the Branford Walkers, primarily for the fitness of seniors.  “Chet” is also the Chairman of the Branford Conservation and Environment Commission as well as being active in the Branford Land Trust.

A resident of Branford since 1955, Chester has been married to the former Daryl Fox for 42 years and is the father of four children: Lynn Cote, Steven Bloomquist, Judy Nyberg and Krista Bloomquist.

“Each year I have heard about this award and I assumed that others would take bows for me but it is a distinct honor to accept this award.  I am very proud to be included in the Branford Sports Hall of Fame” said Bloomquist.