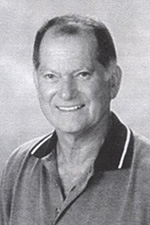 As opponents ventured to Branford to compete against the football, basketball, and baseball teams in the late 1940’s, it was commonplace to see one athlete so caring of others, so devoted to the community, and so unselfish in his accomplishments. However, when game time approached, 1999 Branford Sports Hall of Fame inductee Charlie Lake soon changed his pleasing personality to one of competitiveness, desire, and determination. It was through this transformation which helped lead Branford to several successful seasons in Branford athletics.

Born in New Haven, Connecticut  on January 7, 1929, Charlie attended schools in the Branford system, including, Branford High School from 1943 to 1946. During that time, he played football and basketball for two seasons, and baseball for three.

As a forward on the Hornets basketball squad, Charlie assisted the team to one Housatonic League title and two state titles in his junior and senior year. In 1945, Branford  won the State Championship in Class “B” play, defeating Wallingford, Rockville, and Derby. In the regular season, Branford finished second only to Class “A” Stratford  in the Housatonic League.  During the 1944-45 season (16-6 win/loss record), he scored 65 points ( 3.0 points per game average) coming up from the jayvee squad. Charlie played with fellow Hall of Fame inductees Bill Hinchey ( inducted in 1991), Bill Mischler (1993), Jim Murphy (1995), Ken Erickson (1997), Henry Olejarczyk (1998), and Tony Proto (1998).  These players competed for another hall of famer, Coach Warren Sampson (1992).

In his senior season, Charlie and the rest of the Hornets squad made a clean sweep by taking both the Housatonic League Championship and the State Class B title. The state title was taken after four competitive contests in the Yale Gymnasium, winning  the championship,  over Stonington, 44-31.  This team was viewed as being one of the best Branford teams ever assembled.  During this title season, tonight’s inductee led the team in field goals (95), free throw attempts (113), free throws made (77), points (267), scoring average (12.1) and free throw percentage (68.1).  Branford composed a record of 17-5 that year, including an 11 game winning streak to finish out the season.

As a shortstop for the Branford High School baseball team Charlie was a member of the Class “B” State Championship team in 1944. Despite winning only two of it first six games, Branford showed impressive performances against the likes of Milford, Boardman Trade, Seymour, and Shelton en route to its title.  In his junior season on the diamond, he led Branford to a runner-up position in the tough Housatonic League. Branford won six of its first eight games to cap a second winning season.

Following a two year rest period which was necessary because of wartime conditions, Branford High School renewed its interest in football and in 1945, Charlie was an end for the Hornets that season and was a back and co-captain in 1946, during his senior year.

After high school, Charlie attended Wesleyan University, where he played freshman tennis, freshman basketball, and was a member of the varsity wrestling squad. He then went to work for the United States Army Corps of Engineers from 1952 to 1980. From 1963 to 1965, while earning his Bachelor of Science Degree from the University of San Francisco, he was the Men’s Varsity Tennis Coach.

Recreationally, Charlie has involved himself with volleyball, wrestling, tennis and racquetball.   He was a finalist in the 1950 New England AAU Championship team in volleyball, a Connecticut YMCA and New England AAU Champion in wrestling,  and the All-Army senior singles champion in tennis in 1974, 1978, and 1979.  He has also won the Golden Masters Championship for racquetball at the World Games in Toronto, Canada in 1985, and the U.S.A. Masters Championship in 1980, 1982, and 1986.

Charlie is the father of three children: Pamela, Elizabeth, and Robert, and is the companion of Martha Nolan. Charlie now resides in  Virginia.