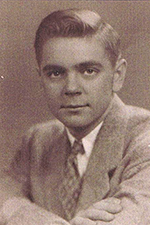 Rarely has there been an individual who completed so much and attempted even more.  In the late 1930’s and early 1940’s, Branford was graced with such an individual as a classmate, an athlete, and as a serviceman in the form of 2002 Branford Sports Hall of Fame inductee Charles “Buddy” Montelius.

Born on February 16, 1925 in New Haven, “Buddy”, as he was nicknamed in high school, attended Branford schools and was a two-sport athlete in high school as a forward on the basketball team and as a first baseman on the baseball team.

The 1940-41 Hornets’ basketball team finished the most successful seasons in several years, being victors in the Housatonic League conference, winning 18 out of 22 games and reaching the finals in the state Class “B” tournament.  This team had several Hall of Famers on it, including Stan Petela (’89), Robert M. Owens (’96), Tony Hynovich (’97), William Fortune (’97), and was coached by Johnny Knecht Jr. (1988).

The following year, during his senior season, Buddy led the Hornets to a second place standing in the Housatonic League, ending with nine victories and five defeats (14-7 overall).  However, more importantly, the Hornets claimed the Class B State Championship, defeating  Woodrow Wilson, by a score of 41-35, ending its opponent’s undefeated streak. Tonight’s inductee was nominated for All-State honors following the crowning as champions.

The baseball team enjoyed a tremendous season in 1941 with Buddy as its first baseman. Following two early season defeats, the Hornets went on to win five consecutive games, defeating Wallingford (8-7), Derby (7-5), Milford (9-7), Seymour (8-7), and Shelton (14-2), giving the team hopes for even a better showing the following season.  As a tri-captain in his senior season, “Buddy” led Branford to a respectable 4-2 record, with wins over East Haven (6-5), Milford (4-3), Seymour (11-6), and Shelton.

Off the playing field, tonight’s inductee gave of himself to numerous organizations and committees including the Junior Red Cross, the Student Council, the Graduation Committee, the Boys Glee Club, and the Hornet Board.  He was Class Treasurer and football manager as well.    Buddy was voted Most Athletic Male and Class Heartbreaker by his peers.

Following graduation, he went to Hopkins Grammar School in New Haven , where he played football, in addition to basketball and baseball.  He received his “H” Award at Hopkins for his athletic prowess.

When he became 18, Buddy enlisted in the United States Navy and received his boot training at Newport, Rhode Island.  From that base he went to Virginia to a Diesel School and then to his commissioned ship.  As a Motor Machinist’s Mate 3-c, Buddy died tragically in the service on December 21, 1945.  He is survived by his sister, Doris Witkowsky.