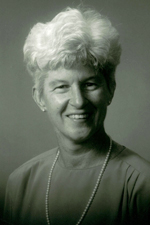 “I believe that children are our future.  Teach them well and let them lead the way.” – Singer Whitney Houston “the Greatest Love”

Perhaps, the renowned singer did not exactly have 1994 Branford Sports Hall of Fame inductee Cathy McGuirk in mind when she wrote the song, but the words truly attest to the exceptional accomplishments that this 17 year field hockey coach has brought to Branford athletics.

A native of Westport, Connecticut and a resident of Branford since January of 1972, McGuirk graduated from Central Catholic High School in Norwalk, Connecticut with the class of 1963.  While there, she played field hockey, basketball, tennis and softball and received the “Best Athlete” award in her senior year.  Later, McGuirk attended Southern Connecticut State College where she played one year of basketball, four years of field hockey and served as the softball manager for a year as well.  As a goalie on the field hockey team, McGuirk was undefeated and unscored upon.  She graduated in 1967 with a degree in Health, Physical Education and Recreation and also earned her Master of Science Degree in Elementary Education.  Under 1990 Branford Sports Hall of Fame inductee, Virginia Moessmang, McGuirk was a student teacher at Branford High School in 1967 and later moved on to teach Elementary Physical Education at Roxbury Elementary School in Stamford, Connecticut for three years, East Haven Middle school for a year, and the last 24 in Branford, one at the Junior High and 23 at the Branford Intermediate School.  McGuirk took over the coaching reign of the field hockey team in 1977 and earned her first state title in 1985, when Branford finished with a 17-1-1 record, setting a record for wins in a season by Branford field hockey and the most victories in the state that year by any team in any class. Branford captured its second title the very next year with a record of 16-3, defeating East Lyme in the finals 1-0 in overtime.  As Class L runner-up in 1987, McGuirk and the Hornets field hockey teams set several state records by winning four consecutive state titles from 1988 to 1991, with a 67-3-5 record over that period of time.

In a 17 year career, McGuirk has compiled a record of 215-53-36, 15 year in tournament play, set records for 14 straight semi-final appearances, eight straight years in finals, six state championships and four times consecutive state championships.  Under McGuirk’s direction, Branford has also won seven Housatonic League crowns and has coached two undefeated teams.  She has been named Class M and Connecticut High School Coaches Association Coach of the Year, Region I Coach of the Year and National Coach of the Year “Special Sports” for the National High School Athletic Coaches Association and inductee into the New Agenda Northeast Sports Hall of Fame.

“Being inducted is a wonderful honor and also to be included with all those wonderful people that are already there.  It’s really special and something that will be remembered for a long time,” said McGuirk, whose husband John, also serves as the assistant field hockey coach for Branford.