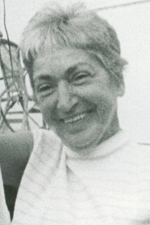 Catherine Laich Shockley would qualify in Reader’s Digest as “My Most Unforgettable Character.” From her childhood, which was centered about the old Harbor Street School, she is remembered as an athlete who could outshoot any boy in the neighborhood with a basketball and out swim any opponent who competed in the open races a the remembered Branford Point Aquatic Meet.

She was received as an equal in performance to all boy competitors in her teen years in swimming, diving , and basketball. Yet, she showed an affability that masked her athletic competence. She had no equal in making friends as her reputation grew in ever widening circles. For three years in the High School then on Eades Street, Catherine dominated a girls basketball team which climaxed her school days with an undefeated season.

In subsequent years, she moved further afield playing with the East Haven Jeff’s and Jack’s Speedgirls of Middletown before joining the nationally famous Olson’s All-America Redheads, a girls’ team that traveled the nation and beyond playing only against men’s clubs. After a couple of seasons, she was joined by her sisters Eleanor and Hazel Smith, both of whom were Catherine’s teammates in her last year at Branford High. It was a trio that split up with the advent of  World War II.

Her quest for excellence did not die with her marriage to Bill Shockley and eventual motherhood to two amiable children, Alan who had the easy assurance of his father and Tooney who became a swimmer of national renown, good enough to hold her own against future Olympians.

In their pre-teen years, Catherine, recognizing the value of her own athletic training, dating from the period of the town’s first community directory, Henry Parsons, re-instituted the Branford Point Day with the help and encouragement of recently retired recreation director, Joe Trapasso. The big race was swimming fro the Mermaids to the Point. Largely through her efforts, the field increased magically, and in very few years, Branford Point Day became like the picnics of old pinpointed by the swimming races.

When the pool at the Intermediate School became a reality, the race from Mermaid Island was transferred from salt water to the pungent chlorinated water of the school pool, and in tribute to her desire for excellence for all children in all fields, it bore her name.

Even before that occasion, the slim, unbelievably strong and purposeful Catherine instructed the boys at Harbor Street School in the techniques of football, basketball and baseball as good as most men might – and with more patience and understanding.

As middle age advanced upon her, she answered an inner call to instruct girls in swimming and with the techniques taught her by the late Henry Burke of Yale swim coaching fame, she made use of the YMCA programs for twice weekly workouts that led to Branford dominance again.

The Town’s recreational programs are in capable hands now with programs for all in every nook and cranny of our boundaries. Above and beyond, however, is the image of the mother of two who adopted, in her unique fashion , he children of the town and taught them to achieve.