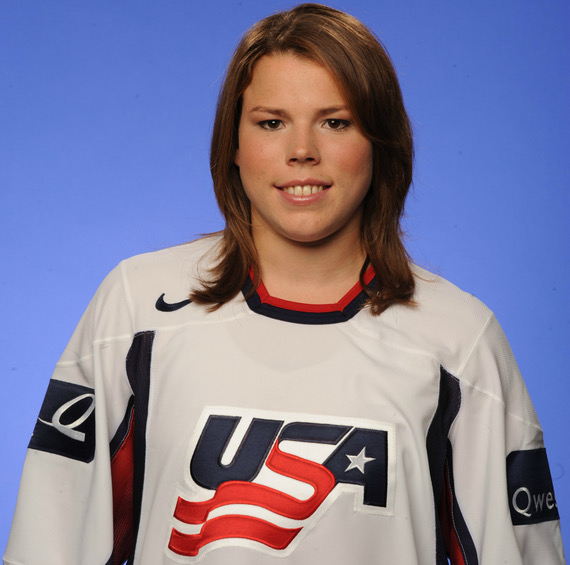 In the thirty year history of the Branford Sports Hall of Fame dinner we have honored some truly remarkable individuals. Many all league, all state and All American athletes, Hall of Fame coaches in their respective sport and outstanding individuals that have through their sports advanced to high positions in the sports world, including several NFL players. the executive producer of the Olympic Games for NBC, the General Manager of a major league baseball team and in fact the President of Major League Baseball before he retired.

We add to that amazing list tonight. We have never honored a person from Branford who was a member of an U.S. Olympic team never mind a two time medal winner. Tonight we are pleased to recognize Caitlin Cahow who was raised in the Short Beach section of Branford.

Caitlin is the daughter of Yale Professor of Surgery Barbara Kinder and the late Elton Cahow, also a surgeon who died of cancer when our honoree was only 11 years old. Caitlin also has two brothers Garrett and Christian.

As the story goes, Caitlin’s first exposure to the ice rink was through figure skating. After one figure skating practice she saw hockey players take to the ice and noticed that the players had ponytails. Word has it her mother forced her to play her first year in hockey in figure skates. From there she gave up figure skating and attended a kids hockey clinic, where most of the students in the clinic were boys. Let’s say the rest is history.

Caitlin graduated from Foote School and Hotchkiss School where she played soccer, field hockey, ice hockey and lacrosse. She later attended Harvard where she played hockey for the Crimson in the ECAC under highly regarded coach Katey Stone.

“Caitlin was a tremendous player, person, and teammate for the Harvard hockey program. She was versatile, explosive and dominant” said coach Stone recently. She added, “She made an impact on and off the ice. We are so proud of Caitlin and all that she has accomplished and become since her days at Harvard”.

At Harvard Caitlin developed into an outstanding defensive player. In one year she led all the ECAC defensemen with 37 points in 34 games Her sophomore year she had a ‘breakout season’ and got on the radar for the national team. This led to her making the US Olympic team where her club won a bronze medal in Turin in 2006 and a Silver Medal in Vancouver in 2010.

In addition to the bronze and silver Olympic medals won by Caitlin for USA Hockey, she was a four-time member of the U.S. Women’s National Team for the International Ice Hockey Federation World Women’s Championships winning Gold in 2008, 2009, 2011 and Silver in 2007.

Later on Caitlin went on to earn to earn her Law Degree from Boston College Law School in 2013. She now works for the highly regarded law firm Jones Day in Chicago where her practice focuses on business restructuring and reorganization.

In college she RBK First-Team All-American and First Team All-ECAC Hockey selection, the 2008 ECAC Tournament Most Valuable Player, First Team All Ivy 2007-2008 and the 2008 USA Hockey Women’s Player of the Year Award among others. Tonight we add to that list with her induction into the Branford Sports Hall Of Fame.