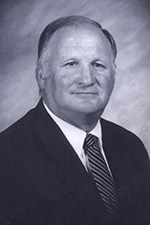 Regardless of the opponent, 2000 Branford Sports Hall of Fame inductee Bruce Johnson demonstrated such a strong  belief in his team, his coaches, and himself,  that defeat was never an option and victory was the only solution during his athletic career high school and college.

As a student at Branford High School from 1963 to 1966, Bruce was a three sport athlete in football (running back), basketball (forward), and baseball (catcher). During his freshman season, Bruce was part of the Hornets football team that went 6-2-1 and was awarded the Outstanding Freshman Player.

In 1964 as a member of the basketball squad, Bruce led Branford to an 11-6 season losing to Rockville in the State Class “B” Tournament.  In recognition of his fine running and kicking efforts in the East Haven football game, Bruce was selected Player of the Week by the New Haven Register.

Tonight’s inductee enjoyed yet another great season in his junior season with the Hornets basketball squad as they posted a 15-5 record and reached the second round of the Class “B” State Tournament, defeating Windsor Locks (84-43) before losing to Abbott Tech in a close battle, 55-52.  For the season, he scored 146 points, an average of 7.3 points per game.

Following graduation, he attended Bucknell University in Lewisburg, Pennsylvania.  While there, he lettered in both baseball (as an outfielder) and in football ( as a fullback).  He graduated in 1970 and earned a Bachelor of Arts degree in Religion.   He continued his education at the University of Edinburgh in Edinburgh, Scotland before attending Yale Divinity School  for his Masters of Divinity in 1973 and his Masters of Sacred Theology in 1975.  Bruce was ordained to the Christian ministry in 1973 at the First Congregational Church in Branford and accepted a call to become pastor of the First Congregational Church of Coventry, Connecticut.  In September of 1973,  he began his pastorate and is currently in his 28th year of service.

Married to his wife, Lois Ranck Johnson, Bruce is the father to sons, Timothy and Peter.