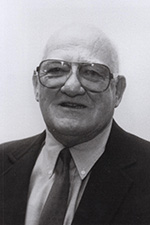 His attention to detail was superb. His devotion to being the best that he could be never was in question.  His willingness to help others set an example for many to follow.  2001 Branford Sports Hall of Fame inductee Bob Vishno demonstrated a zeal for life as an athlete, a teacher, an administrator, a coach,  and a close friend.

Bob attended Branford High School from 1946 to 1949, where he  played football, baseball and basketball , and won eight varsity letters under former Branford Sports Hall of Fame inductee and coach, Warren Sampson ( class of ‘92).   As an  end and receiver on the football squad first team, he was a teammate of Hall of Fame inductees,  Joe Chandler (‘90), Blake Lehr (‘97), and Vincent Casanova (‘98).

“Vish”, as he was known in high school by many,  was an integral part of the Branford Hornets basketball squad. During his sophomore year,  Bob contributed to the  team’s sweep of both the Housatonic and State Class B titles. Branford finished the year undefeated with a record of  21-0, including 18 regular season wins and three tournament victories.  With the titles earned that season, Branford claimed a second consecutive Housatonic League championship and a “three-peat” as state champions.  In the Class B Tournament , Branford defeated Milford, Stonington and later, Wilcox Tech,  in the title game, 33-31.  As a junior, Bob led the Hornets to a 13-6 record, which included a 19 point effort  versus Windsor High School in the C.I.A.C. playdown game, a contest Branford won by the final score of 66-38.  The team would eventually fall  to Sacred Heart 41-38, in the quarterfinals of post-season play.  During the 1948-49 season, “Vish” played in all 19 games, was third on the team in field goals (66), points scored (174), and average (9.1), in addition to being co-captain.  Bob also was a pitcher and third baseman on the Branford High School baseball team.  During his senior year, Bob was voted “Most Athletic” by his classmates.

After graduation, Bob continued his education on a scholarship  to Milford Prep from 1949 to 1950.  While there, he played football, basketball and baseball and was named the “Best Senior Athlete”.    Tonight’s inductee won a football scholarship to the University of Colorado from 1950 to 1951.  Bob later  went on to earn his Bachelor of Science degree from Southern Connecticut State University from 1953 to 1956 and his Masters’ Degree in 1960, where he played three seasons  of varsity football for coach Jess Dow and was selected to the All-Connecticut Small College Honorable Mention Team  in 1955.   Bob also was a three year  varsity golf member at Southern and captain in his senior year.  Following college, he played semi-pro football for Branford Laurels and Roesslers of New Haven.

As a professional, Bob was hired by Sag Harbor (New York) Board of Education as a teacher/coach for Pierson High School for 31 years from 1956 to 1987.   While there, he coached several sports on the junior varsity and varsity level in basketball, baseball and golf and won Coach of the Year honors in each of the three sports as part of the New York State Coaches Association.  Bob was one of only three coaches in the Suffolk County to win over 100 contests in three sports.  The 1978 basketball team won the State Class C Championship in Rochester, New York.   Bob later served as Athletic Director for seventeen years and honored by the Suffolk County Athletic Directors in 1986 for service to the county.

Currently,  tonight’s inductee has been a teaching golf professional for the past thirty years at the Poxabogue Golf Center. Bob, who has been married to his wife, Lillian, for 49 years, and resides in Sag Harbor, New York,  is the father to three,  daughters, Dana Truxillo and MaryBeth Armstrong, and a son, the late Robert Vishno, Jr.