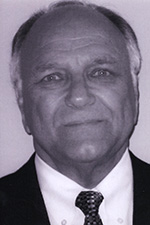 Whether it was a three sport athlete, a meritorious serviceman, or as a successful businessman, 2003 Branford Sports Hall of Fame inductee Bob “T.O.” Tokarczyk consistently demonstrated hard work, high morals, and great accomplishments, leaving a legacy of superior accolades for many to try and duplicate.

A member of Branford High School from 1962 to 1965, “T.O.”, as he was nicknamed in school, was a three sport athlete in football (quarterback, running back, and cornerback), basketball (guard), and baseball (outfielder). As a member of the gridiron squad, for four years, he claimed numerous awards in his senior season including Most Valuable Player, All Housatonic League selection, and All State member, in addition to being named New Haven Register  “Player of the Week” for his two touchdown, 100 yard performance versus Seymour on October 31, 1964.  Throughout his four year career, Bob led Branford to an 18-16-2 record. As a senior and co-captain along with fellow inductee Edward “Leon” Brazzell (’99) in 1965, tonight’s inductee scored 10 touchdowns and guided the Hornets to a 6-2 record, resulting in the CIAC trophy for the outstanding Class B football team. He was selected to the prestigious Nutmeg Bowl team at the end of the season for his accomplishments.

As a member of the Hornets baseball squad, Bob lettered all four years as a left fielder. He was named to the All Housatonic League team and led Branford in batting during his junior and senior year, where he was captain in 1965. In basketball, Bob played the guard spot on the freshman team and three years in the CYO League.

Following graduation, he attended the University of Connecticut and as a freshman, played football at the rover back position for then head coach Lou Holtz.  Bob transferred to Nichols College and played outfield for the baseball team in his junior season.  He was a member of Chi Phi Fraternity, Atlanta Lawn Tennis Association, Points North Golf Association and the Atlanta Ski Club.

After college, he worked in a management position for Seagram’s Distillers for 16 years and was named Salesman of the Year in 1981. From there, he became Vice President of Sales for Monarch Sales Company for two years and Southeast Regional Manager for Koala Springs (three years) and Everfresh Juice Company(two years).  Tonight’s inductee was the Director of Sales for Chateau Élan for two years.  Over the last seven years he has held the Southeast Regional Manager position for Crystal Geyser Water Company.

Bob is a 24 year resident of Atlanta, Georgia, where he resides with his wife, Sue.  He is the father to son, Jeff, and daughter, Carly.