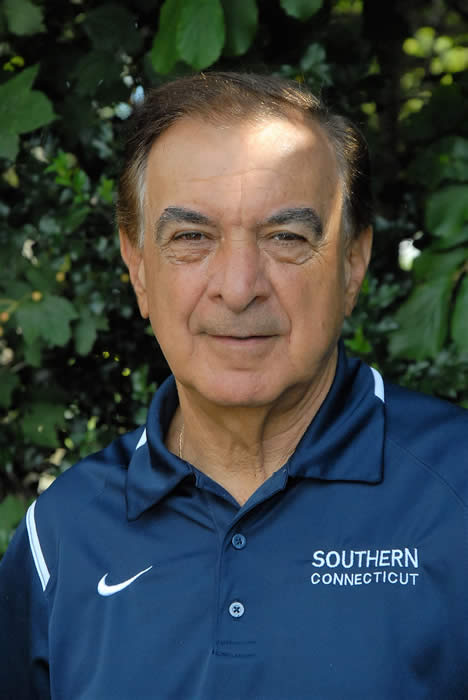 Long time Branford resident Bob Dikranian is among the most respected and accomplished soccer coaches in the state. In the soccer world, he has earned recognition and honors in Connecticut and across the nation for his extraordinary contributions to his sport and for his coaching excellence.

Bob was raised on Long Island and attended Bayside High School. With the guidance and support of his father and high school coach, Bob attended Bridgeport University where he graduated in 1962 with a Bachelor of Science degree in physical education. At U.B. he played for Hall of Fame coach, Bob McKeon, competing in the first ever NCAA soccer championship game and earning All-America honors in 1961. In 1965, Bob was awarded a Master of Science degree from U.B. He has earned 18 post Master’s Degree credits at Southern Connecticut State University.

In 1966, Bob founded the Southern Connecticut State University men’s soccer program and was named head coach in 1968, thus beginning a 21 year career which catapulted Southern onto the national soccer map. During his career at SCSU, the Owls posted a 227-94-21 record, appeared in 14 NCAA Division II tournaments, including six straight trips to the semi-finals. Bob’s 1987 team won the NCAA championship, the first in Southern’s history. He was the university’s tennis coach and Director of Intramurals and Club Sports.

Since retiring as head coach at SCSU, Bob has continued his extensive involvement in soccer. He has served as assistant coach for the South Florida men’s soccer team and the Yale women’s soccer team. He also served as Director of Soccer Operations at Yale. Bob coached the Vasco DaGama Soccer Club, the New Haven Soccer Club and the South Central Soccer Club. He is currently assistant women’s soccer coach at SCSU and serves as the Coordinator of Soccer Officiating for the ECAC. Scores of his former players have followed Bob into coaching at the intercollegiate level. Bob is responsible for developing countless high achieving soccer players, including NECC Conference players, All New England Players, All America players and professional soccer players. The names of his former players dot the ranks of intercollegiate and professional coaching. Bob has been an active soccer clinician including giving lectures at the USSF National Clinic, National College Soccer Coaches Association of America Clinic, and countless other clinics. A true leader in the soccer world who continues to give back to his sport, Bob has been the South Central Coaching director in Soccer, Women’s Director – Olympic Development Program, Past State ODP Director, Deputy Commissioner of Officials for the Special Olympics World Games and United States Soccer Federation Region I coach. He has authored 14 articles about soccer coaching in national professional publications.

Bob has two grown children, David and Susan, a granddaughter Bria and a great-granddaughter Abri. After his wife, Karen, passed away, Bob remarried. He and his wife, Sue, currently live in Branford.