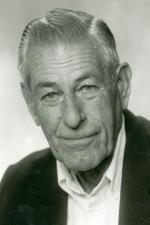 It is one thing to achieve fine accomplishments in one or two sports in high school and college and another to succeed in four as 1991 Branford Sports Hall of Fame inductee Bob Bradley did over his career at Hopkins Grammar School and the University of Richmond.

While at Hopkins, Bradley earned 11 varsity letters in all including letters in football, swimming, baseball, and basketball. In 1937, Bradley won the Walter Camp Prize, awarded to the athlete in the Hopkins Junior School who has successfully earned the most for the school in athletics. In the fall of 1937, Bob made the varsity football team, and in the spring, he earned a varsity letter in swimming and in baseball as a southpaw pitcher. The following year, Bradley won a football letter and from his sophomore season on was captain of the team, captured the 50 yard prep school swimming award, and was awarded another varsity letter in baseball. In the fall of 1939, Bradley helped the Hopkins football team to an undefeated season as one of its outstanding kickers. That season as Hopkins went without a swim team; Bradley went out on the hardwood floor and successfully led the grammar school basketball team while earning yet another varsity letter. By his senior year at Hopkins, Bob had earned varsity letters in football, basketball, swimming, and baseball.

After Hopkins, Bradley attended the University of Richmond for one year and was a member of the varsity baseball program there. Bradley left school due to World War II to join the United States Marine Corps and served from 1942 to 1945, when he served in Tarawa, Okinawa, and Saipan. Off the playing field, Bob was an active member as vice president of his junior class, treasurer of his senior class, and a member of the science club, study club, prom committee and gift committee.

Upon returning from the war, Bradley played for the popular Branford Townies for six years. In 1946, Bradley married Joan Gillis and had two sons, Bob and Guy.

Voted best athlete and best built by his senior high school class, Bradley is honored to be inducted into the Branford Sports Hall of Fame.

“I’m honored. I was completely surprised when I was notified that I had been inducted into the Hall of Fame. It is a great honor, believe me. This is something I never expected.”