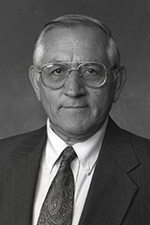 It stands to reason that good things happen to good people.  Such is the case for 1997 Branford Sports Hall of Fame inductee Blake Lehr.  As a three-sport athlete in high school, a respected serviceman in the United States Army, and a valued contributor in the town of Branford, tonight’s inductee has brought considerable admiration to himself, his family, and to the community.

As a student at Branford High School from 1948 to 1951, Blake played varsity football, basketball, and baseball for three years under 1992 Branford Sports Hall of Fame inductee Warren Sampson.  On the gridiron, Blake played left halfback for the Hornets.  While attempting to build a stronger program in football the Hornets excelled during Blake’s senior season, when they finished with a 4-3-1 record.  During that year, he set the tone for the Hornets as he scored the first touchdown of the year in the season’s opener, a 31 yard match, enabling Branford to defeat St. Mary’s Friars, 13-7.  Branford won four of its first five games and in those contests.  Blake scored five touchdowns.  During his career on the football field, Blake played with the likes of fellow inductees such as: Joe Chandler (1990), Peter Ablondi (1992), Russell “Butch” Gordon (1994), Robert J. Massey Sr. (1994), and Louis Locamo (1996).

Tonight’s inductee enjoyed some of his finer moments on the basketball floor while at Branford High School.  As a sophomore, Blake was an impressive passer for the Hornets as they posted 13-6 record, which included a win versus Windsor High School in the C.I.A.C. play down game, before falling to Sacred Heart in the quarterfinals of post-season play.  That year, Blake played in all 19 games and was fifth on the team in points scored, baskets and points per game average.  It was during Blake’s senior season that the Hornets enjoyed the road to success.  The 1950-51 basketball team posted an impressive 14-5- l record, including a 10-2 league record.  Branford lost in the quarterfinals of the C.I.A.C. Class B Tournament to Woodrow Wilson by a score of 57-56.  After trailing by 17, the Hornets unleashed a furious last quarter assault that just fell short.

As a member of the high school baseball team, Blake competed as a shortstop and was named co-captain of the team in his senior season.  Off the field, he was senior class Vice President and voted Most Popular by his classmates.

Following graduation, Blake went on to play short stop and third base for the Branford Townies in the Shoreline League and later in the Middlesex County league where he won the batting title in 1956 with a batting average of .354.  He also attended New Haven State Teachers College, now known as Southern Connecticut State University, where he played football and baseball under Coaches Jess Dow and Doc Moore.  In 1954, he entered the service and was stationed at Fort Drevins, Massachusetts where he was chosen to play third base for the post baseball team.  In 1955, his team won the first Army tournament and Blake represented the Army in the All-Army Tournament in Virginia.

In 1956, Blake went to work for Western Electric and retired 37 years later from AT&T.  During that span, he held various positions including Account Clerk, Time Standards Auditor, and then retired as a Line Production Supervisor.  During this time, he played baseball in the West Haven twilight league and basketball in the Industrial League.  Tonight’s inductee has also coached Buddy League baseball, Little League and youth hockey teams.  He brought the pee wee hockey team to two titles in 1983 and 1984, in addition to earning the Branford Townies Award for dedication in athletics and sportsmanship in 1982.  He is currently working at the Guilford Racquet Club as a tennis instructor for the Junior tennis program.

Blake was married to his wife of 40 years, Joan Kaminsky Lehr, until her unfortunate passing this past June, and is the father of five children: Blake Steven, Tracey (Roth), Kristin, Stuart and Stephanie.  He is also the grandfather of four.  “I am so proud, honored and blessed to be inducted with so many teammates and friends into the Branford Sports Hall of Fame,” said Lehr.