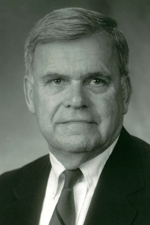 Born in Branford, the son of the 1992 Branford Sports Hall of Fame inductee Adolph Mischler and Martha Mischler, Bill lettered in three sports while at Branford High School – football (as a quarterback and punter), baseball (infielder), and basketball (as a forward).  During his four years, Mischler appeared in four Class B Finals, winning three titles.  In 1944-45, the Hornets finished the season with a 16-6 record, including two seven game winning streaks highlighted by victories over Wallingford (38-33), Rockville (30-29) and Derby (31-25) in tournament play.  Following a 17-5 1945-46 season and a Housatonic League and second Class B State Championship, Mischler and Branford went undefeated in the 1946-47 season, (18 regular season wins, three tournament wins) en route to a second Housatonic League championship and a “three-peat” as state Champions.  In the class B Tournament quarter final game, the Hornets topped Milford before a crowd of 2,000 at the Payne Whitney Gym, 41-16, with Captain Bill Mischler leading the team with 13 points.  With a win streak of 32 games behind them, Branford took on arch rival Stonington and defeated them by the score of 37-30.  In the game, Mischler netted 20 points, including a dazzling exhibition of his pattern one hand tosses from all over the court.  Nicknamed the “Skipper,” Mischler enabled the Hornets to claim its third state title by arching a long one-handed shot from side court with two seconds left, tripping Wilcox Tech 33-31 in the championship game.

Mischler, a 1947 graduate, was an Honorable Mention All-State player on both the football and basketball teams as well as being president of the senior class.

Recruited by the University of Connecticut on the strength of his tournament play, Mischler played freshman basketball and a year of varsity hoops at the guard and forward position.

After college, Bill played basketball for many teams, such as Red Devils, Piccadily Restaurant and Midway Restaurant as well as teaming up with 1991 Hall of Fame inductee Bill Hinchey.  He later played fast pitch softball as a pitcher and infielder on the Midway Restaurant team in the State League.

A Untied States Marine Corps veteran of the Korean War, Mischler has been married to Mary Jane for 36 years and has resided on Windmill Hill Road.  They have four sons – Bill, Joe, Peter, and Michael and three daughters – Mary Kate, Barbara, and Ellen.  Retired since 1985 from Atlantic Richfield Company, Mischler is now a real estate agent.

“The Branford Sports Hall of Fame is really the final award you get in sports.  It is an honor to be recognized and associated with people already inducted.  What an honor it is to join them,” said Mischler.