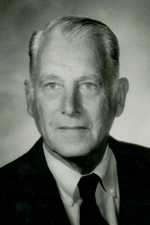 Known for his legendary hook shot, Bill Hinchey led the  1945 Branford High School basketball team to a Class B state championship and represented Branford as the leading scorer in the state.  Bill was also captain of the Hornets football team in 1944 and 1945 before joining the Marines, where he served in China and was captain of the United States Marine Corps basketball team in 1946 and 1947.  After returning from the service, Bill resumed his education at Collegiate Prep in New Haven and played both football and basketball there.  Bill was named captain of the hoops team in 1949.  Hinchey continued to excel on the football field and on the basketball courts in several semi-pro teams around the state.

As a hard-nosed, never-say-quit-type player, Bill played basketball under Warren Sampson at Branford High School.  In 1945, Hinchey led the Hornets to a 16-6 record, including two winning streaks of seven in a row.  As the top scorer on the team as well as in the state with 287 points and a 13.0 points per game average, Bill was high scorer in 17 of the team’s 22 games.  In the championship game against the Derby Red Raiders, the Hornets topped Derby by the final score of 31-25 before a crowd of 1800.  Bill Hinchey was high scorer in the game with 12 points while captain Henry Olejarczyk and Bob Geir returned to the line-up after missing the semi-final game due to illness, to strengthen the Hornets bench and lead them to a victory.

After his junior year at the high school, Bill enlisted in the Marines and was captain of the basketball teams in 1946 and 1947.  Back home in Branford, Hinchey was elected captain of a rebuilding football team in 1946, but Bill opted for the Marines instead.

Continuing his education at Collegiate Prep in New Haven after returning home form the service, Hinchey played halfback for the football team and was captain of the basketball team in 1949.  While at Collegiate Prep, Bill was part of two division titles in 1948 and 1949.  Bill was the New England leading scorer with a 20-plus point average.

Noticing his talent in both football and basketball, many semi-pro teams asked Bill to play for them.  One such team, the Branford Laurels, asked Hinchey to play football in 1948.  While leading their team as their captain in 1949, Hinchey played at halfback.  Leading the Roessler Yellow Tags to a city championship, Bill was looked upon as the best linebacker in the state.

Now as he enters tonight’s Branford Sports Hall of Fame, Hinchey recognizes the impression behind the award.

“The award is important not because it’s the Hall of Fame- but because it’s the Branford Sports Hall of Fame.  When I went to Branford, playing sports in this town was special.  Every game was seen by parents, fellow students, and friends.  People used to carry our bags to the game.  It was something great to play a sport for Branford.”