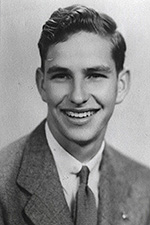 All who knew 1997 Branford Sports Hall of Fame inductee Bill Fortune recall a bright, young man with a magnetic smile and outgoing personality.  However, on the athletic spectrum, in the classroom, and during his enlistment in the United State Navy, tonight’s inductee was considered a serious, competitive, hard-working individual who brought consistency to a higher plateau in Branford history.

As a three sport athlete at Branford High School from 1940 to 1942, Bill represented the town on the football, basketball and baseball teams.  As the center for the 1940 basketball team and playing alongside fellow Hall of Fame inductees Stan Petela, James Barba and coached by John Knecht, Jr., Bill and the Hornets won seven of its last eight games to end the regular season with 10 wins and seven losses record and a spot in the Class B playdown Tournament, only to fall short with 10 wins and seven losses and a spot in the class B play down Tournament, only to fall short to Manchester Tech 37-36.  The following season, Branford had one of its most successful season in several years, crowning itself the Housatonic

League champions by winning 18 out of 22 games and winning the State Class B Tournament.  During the season, Bill played with Stan Petela and 1997 fellow inductee Tony Hynovich.  During his senior season, Bill led Branford to a second place standing in the Housatonic League, ending with nine victories and five defeats.  However, more importantly, the Hornets claimed the Class B State Championship defeating Woodrow Wilson by a score of 41-35.  That season, Bill was awarded All-State honors for his performance on the team as center.

In addition to his talents on the hardwood floor, Bill showcased his athletic prowess on the football field as a halfback on the Hornets gridiron squad and as a pitcher on the baseball team.

Following his graduation from Branford High School, Bill enlisted in the United States Navy, where he was stationed in Newport, Rhode Island.  While there, he played on the U.S. Naval Armed Guard Team during the 1943-44 season.  After the service, Bill continued his athletic contributions on the 1946 West Haven Red Devils and on the East Haven Townies basketball team.  In 1950, he played on the Beachhead Restaurant City-Wide League basketball team, which won the title, and he also was a member of the 1952 Branford Softball Championship team of Page’s Builders of Stony Creek, with 1989 Hall of Fame inductee Bernie Page as it manager.

Bill worked as an Installer for the Western Electric Company from 1946 to 1970.  He was married to his wife, Florence, and was the father to sons, Bob, Bill, Tom and daughters Jane and Nancy.  Unfortunately, Bill passed away March 15, 1970.  His son, Bob, knows his father would have been proud to receive the award if he were alive today.  “He was a man who had very little to say but learning much about him through his friends, I am sure he would have been honored to receive this presentation.”