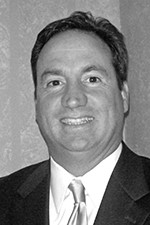 Whether it was his intimidating presence on the football field or his outfield supremacy in baseball, high praise for him remained the same.  Teammates rallied around him. Coaches praised him. Opponents feared him.  During the mid-80’s, 2008 Branford Sports Hall of Fame inductee Bill DeFrancesco  played  a pivotal role in the success of Branford sports.

As a two-sport athlete, Bill attended Branford High School, graduating in 1985. A four year honor student, tonight’s inductee played defensive back and receiver on the Hornets football squad.  Playing for football coach Doug Morrell, Bill was part of the 1982 team that posted an 8-2 record.  The Hornets completed another successful season in Bill’s junior year, achieving a record of 7-3, including wins versus Seymour (28-6), Derby (10-7), Sheehan (28-18), North Branford (3-0), North Haven (6-0), Cheshire (32-6), and rival East Haven (19-0).  As a quad-captain in his senior year with Jeff DeCaprio , Jake DellaCamera,  and fellow Branford Sports Hall of Fame inductee Jim Bell  ( Class of 2005), Bill led the Hornets to a 7-3 record in the tough Housatonic League.  Branford posted victories over North Haven (36-6),  Lyman Hall (27-12), Seymour (30-0), North Branford (21-0), Cheshire (22-8), Amity (7-6), and East Haven (29-6).  Bill was named to the Coaches All State First Team as a defensive back and receiver and New Haven Register All State Second Team.  He led the Hornets in pass receptions for two years and was named to two All Housatonic League First Teams as a defensive back and receiver.

In baseball, tonight’s inductee was an All-Housatonic League Team selection twice and named to the Coaches High School All State baseball first team as an outfielder.  During his senior year, Bill hit for a .426 average before taking his baseball skills to American Legion play and winning the New Haven Diamond Club award.

Off the playing field, Bill was a speaker for the Anti-Drug Program, the director of the student leadership program and won the Criscuolo Award for Scholar Athletes.  He received an appointment to the United States Air Force Academy.

Following high school, Bill attended Princeton University, where he played four years of football as a defensive back before graduating from the Ivy League school in 1989.   His outstanding defensive play in the 1988 game at Yale University is remembered among his many stellar games.  With the Tigers holding a slim 10-7 lead late in the game, Bill recovered a dropped punt which led to a Princeton score and eventual win, 24-7.

After college, Bill went to work for Pansophic Computers from 1989 to 1999. In 2001, he was hired by Pfizer Pharmaceuticals as a District Manager, concentrating on the Northeast region. At Pfizer, he was the winner of excellence in the field for four years.  Currently, Bill works for Meda Pharmaceuticals, Inc. as its Area Sales Manager.

Now residing in Slingerlands, New York, Bill is married to the former Tami Wilcox and is the father to two daughters, Emma ( 10 years old) and Sophia (8 years old).  Tonight, he joins his father, Ray (Class of 1995), with induction into the Branford Sports Hall of Fame.