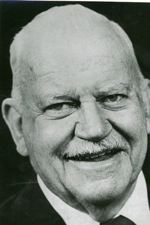 Many a sports fan laments the scarcity of Babe Ruths and Ty Cobbs these days and certainly there are even fewer sportswriters of the stature of Ring Lardner and Grantland Rice. But Branford’s own Bill Ahern unquestionably is one of the few remaining writers cast from that classic mold and equal to their storytelling art. Here is a writer whose own story is an exciting and interesting as the ones he related in word for so many years as an editor and columnist. A masterful storyteller from the old school who modestly admits to “a pretty retentive memory and some ability to put it down.”

Bill got his start with the Branford Review in the 20’s while still in high school. He taught himself how to type and rewrite headlines and even composed an occasional poem in those days, winning a $5.00 prize when Lindberg flew the Atlantic. That momentous event coincided with the Dempsey-Sharkey fight in Madison Square Garden and Bill wrote his poem about Lindy based on that fight.

Bill’s first big interview was with Joe Cronin who had a marvelous year with New Haven in 1926 and was later named the “boy manager” of the Washington Senators. However, once the depression hit, Bill found he had to supplement his writing income with a job on the railroad. Not allowed a radio in the tower, Bill would collect the out of town newspapers from the conductors and practice rewriting the headlines.

Over the course of his career Bill served as city editor of the New Haven Register and the Journal Courier, but his greatest contributions may have been as a columnist and in particular his much loved “counterman” columns. A fictitious breakfast spot and conversations between a counterman and a truck driver was the format used to convey Bills extensive knowledge of Yale football accomplishments, both past and present. Many a reader approached Bill eager to determine where that counterman could be found but Bill never let on that it was a figment of his fertile imagination.

Bill wrote brilliantly about all sports, becoming nationally known for his self-taught expertise in world-class swimming as well as collegiate and professional football. Bill and wife, Phoebe, and her portable typewriter covered a lot of miles and smiles together. They spent many an afternoon watching Yale coach Jordan Olivar working out his Bulldogs. Bill’s year of coaching and scouting paid off.

Bill’s preparation, ability and talent manifested itself in a writing career which spanned five decades and led to his selection as the 1980 winner of the Arthur B. McGinley award presented each year by the Connecticut Sportswriter’s Alliance to a state writer who has served both his professor and his community with distinction.

Bill always took his hometown with him wherever he went. He was Branford’s unofficial ambassador, always with the ten gallon hat and a thousand experiences to relate to all. It is reported that a famous coach once looked across a New York City locker room at Bill and his ten gallon hat and said, “just ask  my friend there from Texas…” The reply from smiling Bill Ahern: “I’m certainly your friend, but I’ll always be from Branford, Connecticut!”