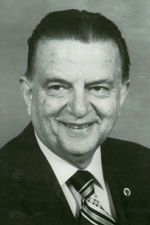 Bernie Page was stricken at age four with polio, he didn’t quit then and he hasn’t quit since. He earned tonight’s recognition without playing sports but because of his own disability he developed a great rapport with those who did play and knew the feelings of those who did not survive cuts. He won three letters with the class of 1941 by managing the football, basketball, and baseball teams, a feat unparalleled in local schools annals. The namesake of the Stony Creek carpenter was heralded for his efficiency by the late coach, John E. Knecht. Despite carrying a full load of academic studies, Bernie showed a remarkable talent for having all the sports gear required by the teams he managed ready for combat. Those whom he readied for play could never remember when needed supplies were not on hand.

Its not a surprising that he looked to sports for a living, and with assistance from his father, he opened his sports store 32 years ago at the foot of Lockshop Hill. He then opened a new store at his present Main Street location and a following quickly developed. Customers found the smiling proprietor anxious to please, event to the point of special orders when needed.

Before Bernie’s emergence as a merchant, numerous attempts to form booster clubs about town all failed but that changed when he became interested. Bernie’s correspondence, ability to locate speaker for sports banquets, and overall knowledge were main factors in the success of the booster clubs.

Bernie generated townwide interest in the town’s sports personalities. Whenever a banquet honored a town luminary, past or present, Bernie and other club founders would be present. Bernie personalized the schoolboys with numerous innovations that were precious to parents and instrumental in promoting sports to the town’s citizenry. Additionally, he proved invaluable as a member of he Original Board of Recreation that established the Branford Recreation Department, a nationally recognized model in the field.

Since 1951, he has been a Mason, Shriner, Rotarian, honorary member of the Rescue Fire Dept. No. 5 Stony Creek, director of the Branford Saving Bank, member of the Recreation Department’s Advisory Board, president of the Biddy Baseball league, and church deacon for forty-four years. He organized the first Hop Nuzzo Softball Tournament and assisted in setting up the first tackle football league with the Booster Club. Bernie is still active as a sponsor of teams in almost any category.