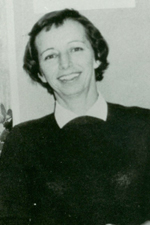 To many, 1995 Branford Sports Hall of Fame inductee Barbara Langdale Barker was much more than just a teacher.  She was an advisor, a councilor, a coach, and more importantly, a friend to many in the community.  Through her unselfish efforts, Barbara provided Branford with an ideal role model for many years.

Born on August 22, 1914, Barbara attended Branford High School and graduated in 1930 as the salutatorian of her graduating class.  Upon graduation, she attended Pembroke College in Providence, Rhode Island from 1930 to 1934 and was a member of Phi Beta Kappa.

Upon her graduation from college, Barbara taught one year at Plainville High School from 1935 to 1936 before she married Harold (Ski) Barker and later had a son, David.  After their bond in marriage, she began playing tennis.  She was the New Haven City tennis champion for two years and was also crowned the New Haven Tennis Association and Branford champion for several years as well as winning numerous mixed double crowns with her husband.

Barbara’s love for tennis inspired her to establish and coach the sport during her 23 years as an English and Business English teacher at Branford High School.  She helped organize the Branford High School Tennis Club for the original purpose of enjoying and improving tennis techniques and sponsored a tournament each fall composed of boys singles, girls singles and mixed doubles sets.  She was the initial force behind setting up the Housatonic tennis leagues for boys and girls which are still going strong today in the new Southern Connecticut Conference era.

In addition to teaching, Barbara was the advisor of the Branford High School paper, “The Hornet” in 1948.  She was recognized for her unceasing efforts in helping the Junior Class and as a tribute to Barbara’s support, the 1960 Milestone yearbook was dedicated to her.

Barbara Langdale Barker passed away on February 3, 1972.  “If she was here today, I’m sure she would say it would be an honor to be included in the company of such great athletes.  My mother would be pleased to be recognized as one of the early women athletes inducted into the Branford Sports Hall of Fame.  She would be smiling, knowing that she achieved this award,” said her son David Barker.