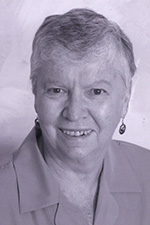 Consistent throughout the annals of Branford High School sports, each team has been graced with that one unique athlete deemed a commendable leader and outstanding sportsperson.  During the late 1940’s and early 1950’s, 2004 Branford Sports Hall of Fame inductee Barbara Jones Crimmins was the exceptional individual.

“Jonsey”, as she was called in school, attended Branford High School from 1949 to 1952 and was a two sport athlete, competing in field hockey and basketball. In her junior year, tonight’s inductee was chosen as the Girls Athletic Association Sweater Girl – a prestigious honor given to a female athlete who demonstrated commendable action in leadership and sportsmanship, which Barbara excelled in both. As a member of the girls hockey team as it was known then (now field hockey), Barbara and the rest of the Lady Hornets, enjoyed a winning record of 3-1, defeating Guilford twice (3-2, 3-1), and Hamden Hall (4-0), before bowing to Hamden Hall (3-2).

As a senior, Barbara was captain of the girls’ basketball team and played for fellow Branford Sports Hall of Fame inductee Virginia Moessmang (Class of 1990) and with Georgette “Tootsie” Laske ( Class of 1999). She was voted by her classmates “Most Carefree”, and “Best All-Around”.

Off the playing field, Barbara was involved in the high school community in many ways. She was on the Milestone Yearbook Staff, a member of the Senior Class Play, the Prom Committee, the Dance Committee, a trombonist for the high school band, and the Cap & Gown Committee.

Following graduation, she studied Nursing and graduated from the St. Raphael’s School of Nursing in 1955 and worked there as a Registered Nurse. She later went to work for the Branford Board of Education for over 25 years in the Pupil Services before her retirement in 2002.

In her leisure time, tonight’s inductee played softball as a student in the Summer Recreation League for Virginia Moessmang’s teams, which competed against New York teams.  She also played in the Women’s Morning Recreation Softball League sponsored by the Branford Recreation Department.  In the early 1970’s, she gave back to the community by coaching girls softball teams in the Recreation Department’s league sponsored by the Atlas Five and Ten Store. Barbara was also a member of the Branford Women’s Club and one of the first to start the town’s Babysitting Seminar.

Married to Jack Crimmins since 1960, Barbara is the mother to Betsey, Tim, Terry and Dan, and the grandmother of Lindsay, James, Aidan, Maggie, Ian, and Ella.  She joins her father, Charlie Jones (class of 1990) into the Branford Sports Hall of Fame.