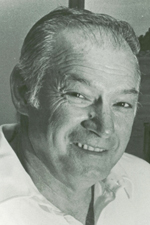 Anthony Yasevac, tonight entering Branford’s Hall of Fame, is a story of neighborhood pals. Recognized now as an important backer of the town’s recreation program, and its teams, Tony’s skill as a softball shortstop was one of several reasons why the enthusiasm of the Fourth Warders remained high after the demise of the Laurels football team.

It is not by chance that the proprietor of the Eel Pot Restaurant constantly sponsors athletic teams on the recreation level. It all started in 1941 when a closely knit collection of chums in the area of Harbor, Bradley and Lincoln Streets first sought sponsorship for their softball team in Harry Brazeau’s Community House League. They sought  the most experienced athlete of the group to direct the team, Paul Ward, and struck gold with Yasevac who had never tried out for baseball in high school. Paul saw the image of the St. Louis Cardinal’s Hall of Fame shortstop Marty Marion in the easy grace with which Tony covered ground. Together with Ben Mezieski, they formed a tight hot corner twosome. Feeling that they needed a sponsor, they sought help form another neighbor, Joe Stegina, proprietor of the Hilltop Garage.

The club found an ace-in-the-hole pitcher, Joe (Bobo) Prahovic, and with the help of Walter Tamulevich, Mike Zvonkovic, Matt Markleski, Frankie Yasevac, Ed Truskowski, Jake Stegina, Paul, James, and John Ward among others, they captured the championship in the Southern Connecticut Softball League the first year out.

Behind the scenes of the first title season were two prominent officials of the town’s Croation Fraternal Union, Michael G. Laich and Matt Belanic, who sought the team’s representation in State and Intersection competition. Eagerly the Hilltops agreed and subsequently the club became know as the Branford CFU. Fervor hit new highs as the team posted state championships in fraternal, town and state softball played. The stability of the sweet fielding and timely hitting of Tony Yasevac was appreciated by an every growing number of fans. For some 14 years, the tireless honoree displayed his skills at the club’s home base at Hammer Field and in regional playoffs in state competition in Stratford. In addition to playing fast pitch softball for many area teams, he was usually given the unenviable task in basketball of guarding the other team’s best player. “Yaz” is also an avid golfer and still shoots in the 70’s.

The father of a daughter and two sons, he maintains his love for all sports by backing various clubs with his restaurant’s sponsorship. In a way, it reveals his appreciation for earlier backing when Joe Stegina helped out a group of kids from the Fourth Ward.