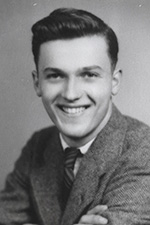 Ever since he was a youngster growing up in the Branford Point area of town, 1997 Branford Sports Hall of Fame inductee Anthony “Toot” Hynovich held an extreme passion for sports, yearned for team success, and encouraged his teammates on in all situations.  Couple his contribution to an era of unmatched sports achievements, Anthony remains a grandeur hero in Branford history.

Born on February 11, 1924, Anthony attended Branford high school from 1939 to 1942, where he played three sports – football, basketball and baseball.  As a sophomore, he played center and linebacker on the Branford High Football team and was a member of the Hornets baseball squad as a centerfielder during his sophomore and senior year.

Toot’s claim to fame came on the basketball floor.  The 1940-41 basketball team which he was on finished with one of the most successful seasons during that era, being victors in the Housatonic League conference, winning 18 out of 22 games and reaching the finals in the State Class “B” Tournament.  The team was ably led by Co-Captain and 1989 Hall of Fame inductee Stan Petela.  As captain-elect, Toot held down the center position outplaying any of the opponents that faced him.  During the 1941-42 season and as reigning captain, Toot lead the basketball team to a second place finish in the Housatonic League, (a 9-5 record in the league and a 14-7 record overall), and a Class “B” Championship beating Woodrow Wilson in the finals.  This team happened to be the last of the championship teams coached by 1988 Hall of Fame inductee Johnny Knecht, Jr. and also included on it, 1989 inductee Joseph Orsene, 1996 Hall of Famer Robert M. “Tot” Owens and fellow inductee William Fortune.

After graduating from Branford High School in the class of 1942, Toot immediately enlisted in the United States Marines.  He was assigned to participate in combat at Guam.  It was there that he was wounded, his right arm shattered by schrapnel.  Tot was later the recipient of the Purple Heart.

Upon returning home, his interests were still on sports.  He umpired many baseball and softball games and was a faithful follower of the high school basketball games coached by his friend and teammate Stan Petela.  Whenever anyone at the Eel Pot, Elm Tree, or Smitty wanted an answer to a geographical or historical question, everyone would say “Ask Toot.”  If he didn’t know the answer immediately, he would check with his famous reference books and almanacs and come up with the answer the following day.

Unfortunately, on December 27th, 1972, many hearts were broken when Anthony “Toot” Hynovich passed away after a brief illness at the age of 48 and is still missed by many to this day.  “He would have been very proud of this induction to the Branford Sports Hall of Fame.  This is such a great tribute to receive in his honor,” said his sister, Olga Hynovich.