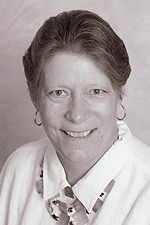 Whether it was as a flourishing four-sport athlete, an unselfish volunteer, or as an integral member of Branford’s 911 Communications Center, 2007 Branford Sports Hall of Fame inductee Anne Ballard demonstrated  loyalty, leadership and teamwork.

Off the playing fields, tonight’s inductee was a member of the National Honor Society, co-recipient of the Girls Athletic Association Sweater Award and voted “Most Versatile” by her classmates.

Anne attended Skidmore College and graduated in 1973 with a Bachelor of Science Degree. While there, she played volleyball, basketball and field hockey.  As a junior, she was selected to the United States Field Hockey Association as a goalkeeper and backfield player.  Anne was named second alternate goalkeeper with the USFHA touring Team Northeast Division. She played versus European traveling teams and was the only United States goalkeeper to hold the Irish team scoreless in 1972.

Following college, tonight’s inductee worked at the First New Haven National Bank in bank operations for almost 20 years.  While there, she managed the Records and Mail Department, courier services, bank fleet, and vehicle maintenance. She shifted gears and in 1994 worked for the Branford Fire Department Ambulance Service as a certified and licensed Emergency Medical Technician.  In 1996, Anne went to work for the town of Branford’s 911 Communication Center, where she still works today.  She is responsible for business and emergency phone communications; dispatch police, fire, and ambulance; and as a communications field training officer.  Tonight’s inductee  has received several departmental  commendations for saving lives by providing ambulance pre-arrival instructions (EMD), and successfully helping to resolve several critical police and fire incidents.   She also works at the Owenego Inn.

Anne has volunteered her time unselfishly in many ways.  She has served as a volunteer cook and server for the Volunteer Services Center for three years, a volunteer of the Friends of Blackstone Library, Camp Rising Sun, and the Blue Jeans for Babies.

She is the daughter of Peg and the late Dick Ballard, and the sister to Rick and Beth.