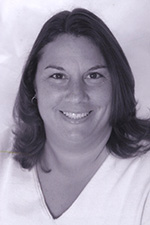 As a two sport athlete during the mid 1980’s at Branford High School, 2004 Branford Sports Hall of Fame inductee Andrea Amendola Kenney was touted as an intense competitor, an unselfish teammate and a devoted student of the game.

It is with these qualities and to no one’s surprise, that this former high school field hockey superstar has dedicated her athletic experiences and her flawless sportsmanship to the Branford community and in particular, to the  youth.

Andrea attended Branford High School from 1983 to 1986, where she was a member of the high school field hockey team coached by fellow Branford Sports Hall of Fame inductee, Cathy McGuirk (class of 1994).

As a sophomore, she earned her first varsity letter. During the 1984-85 season, she recorded six varsity assists and claimed the Lauren E. Hayes Most Improved Player Award during Branford’s 12-1-3 win/loss record.

Andrea was part of the first state title team under McGuirk’s direction in 1985-1986, when Branford finished with a 17-1-1 record, setting a milestone for wins in a season by Branford field hockey and the most victories in the state that year by any team in any class. Ranked second in the State Tournament, Branford defeated Hand (6-0), New Canaan (3-0), Pomperaug (3-2), and the #1 seed Stonington (1-0) to claim the Class “M” State Championship. In that game – a contest which ended in snow – she scored the winning and only goal at her center half-back position, giving the Hornets its title Tonight’s inductee went on to claim a share of the Most Valuable Player Award with fellow teammate Christine Esposito, earned the Desire and Dedication Award, and was selected to the First Team All-Housatonic League and to the First Team All-State. During her career as a member of the varsity field hockey team, Andrea led Branford to a three year record of 44-6-6 and was a tri-captain of the team in the 1985-86 season. Branford outscored their opponents 182-26 and recorded 40 shutouts. Andrea was also a member of the Hornets softball team for four years, where she was a captain in her senior year.

She entered the basketball coaching world as part of the Branford Recreation Department’s Junior Basketball program for the girls’ 10 year old travel team.  Along with fellow inductee  Russell “Rusty” Gordon ( class of 2002), Andrea coached the 2002-03 squad to a perfect 25-0 win/loss season, including  championship victories in the Sal Tinari Basketball Tournament ( East Haven) and Branford’s Joan Bradley Tournament.  In 2003-04, the 11 year old travel team registered a 22-1 record, and were crowned champions in the Tinari, Bradley, and the John J. Keegan Memorial Tournament in Monroe.  She earned the Don Rogers Sportsmanship Award for Coach of the Year from the Sal Tinari Biddy Basketball League. She is presently coaching the 12 year old travel team and is an active member of the Branford Junior Basketball League Board.

Andrea currently resides in Branford where she grew up the youngest of three children of the late Andrew (Pudgy) and Patricia Amendola, who now live in Florida. She is the sister to Anthony and Karen. Tonight’s inductee is the mother to two daughters, Brittney and Kaitlin and son, Kyle.