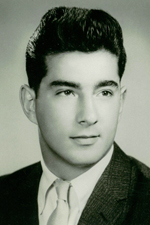 Each tackle 1994 Branford Sports Hall of Fame inductee Americo “skip” Sciarra made was labeled simply as “bone-crushing.”  When the opposed offense designed a play away from his side of the field, Sciarra arrived on the scene just in time to make the tackle.  It was with his athletic powers and desire to succeed which gave the Branford Hornet football squad during the late 1950’s, the privilege of being classified as one of the most outstanding teams during that era.

A two-sport athlete, Sciarra played tackle on the Hornets football squad under Head Coach and 1992 Branford Sports Hall of Fame inductee Dom Cote.  In his freshman year (1956), Sciarra, who made All State Honorable Mention that year, started with the first string on a Branford team which rallied off seven consecutive victories, starting with its home opener against St. Mary’s, a 30-0 shutout, followed by wins versus Derby (19-13), Lyman Hall (34-6), North Haven (6-0), New Canaan (7-6), Seymour (27-7) and Stonington (27-7),before losing its last two games by close scores to Shelton and East Haven.

After being injured for the most part of his sophomore and junior season, Sciarra returned with a vengeance in his senior season.  With Hall of Fame inductee Jack Cirie (1991) and Tom Murray (1992), Sciarra and the Hornets worked their way toward a dream season – going undefeated and winning a state championship.  During the 1958-59 season, Branford outscored its opposition, 184-30, allowing only Derby, Lyman Hall, Southington, Shelton and East Haven six points each.  Branford’s defense recorded four shutouts including a 25-0 decision over North Haven, 14-0 against Seymour, 13-0 to Cheshire, and facing Amity, a 33-0 landside win.  Sciarra led the Hornets in scoring with 10 touchdowns that year for a total of 60 points as a fullback.  With Branford named the State Class “M” champions and number one ranking in that state, Sciarra was selected to the New Haven Register All-Star Team.  The most capturing moment for Sciarra came at the Thanksgiving game, when after scoring his final touchdown for Branford, fans and players carried him on their shoulders at game’s end rewarding Sciarra for his great achievements.  While at Branford high school, Sciarra also played on the Hornets basketball squad for three seasons.

Sciarra joined the United State Marine Corps in 1959 and served at Okinowa and the Far East.  After four years in the U.S. Marine Corps, Sciarra become owner of Sciarra Move and Storage company and is now retired.  Married to the former Ruth Carrolla, “Skip” has two daughters and two grandchildren.

“This award means ‘Thank you” for appreciating what I accomplished in the four years that I played football.  This means a great deal to me,” said Sciarra.