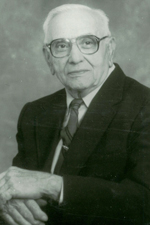 Gnarled fingers are a giveaway to Alfred (Doc) Aguzzi’s twenty years of being a catcher in an era where catchers were taught to catch the ball with both hands. The big-shouldered catcher handled the pitchers in New Haven area in the late 1920’s and early 1930’s.

The native-born Italian’s ability to swing a bat led to statewide recognition, especially during the years of Branford’s reign in the old powerful Middlesex County League. His hitting was always superb and “Doc” was noted for his line drives, even when his bandaged fingers may have handicapped him. Al’s catching ability and hitting ability played a vital role during their three pennant winning years.

Al also accepted opportunities to play with the unforgettable Campanias Club, the North Haven A’s, and the Westsides of New Haven. His abilities were such that Al was often sought by other area clubs to play for them in certain games.

Al excelled in basketball also. It should be noted that when Doc’s family came to Branford in 1913 and settled in the Lockshop Hill Sector, the neighborhood formed its own sports team, largely through the zeal of Dominic Guarnero, the team known as the “Eastsides”  began to compete. Even though town wide foes initially considered them a “soft touch” they became a contender on the sports front. The naturally gifted Aguzzi became the Eastsides catcher and playmaker in basketball.

Due to the economics of the day, Al left high school after two years and went to work for the Malleable Iron Fitting Co. The company had a team in the New Haven’s Industrial League. Al responded to the call for players with such shooters as Squint and Eddie Kamb, the Sanieski brothers, Boley and Ed and the superb Bob Linden among others. In Al’s second year, the great high school coach, John Knecht, moonlighted and brought in an influx of some of his previous players. The path was cleared for state supremacy with the nucleus adapting superbly to Knecht’s coaching. Al, from his guard position, was invariably responsible for holding down the opponent’s leading scorer.

Al was sought by the very powerful St. John’s Big Five of New Haven. For three years in the 1930’s, Al captained the team. His intensity and ability were such that Al was chosen as the All-City guard in 1934. In 1982 he was inducted into the New Haven Tap Off Club’s Hall of Fame.

Al, with the constant love and support from his wife, Estelle, saw their three boys become excellent baseball players and teachers in the Connecticut school system today. Al is especially proud of his grandson, Bob, Jr., who was selected to the All Shoreline Baseball Team this year.

His playing days over, Al found relaxation as a baseball and softball umpire. His calls were seldom challenged.

Al is retired now, his years as Treasurer of the MIF’s Steelworkers of America all but forgotten. His home on East Main Street is visible testimony to a lovely landscaping avocation despite his creeping problems with arthritis.