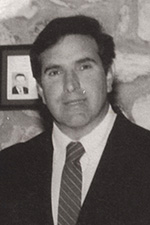 Throughout his athletic career, as a lineman in football, an outfielder in baseball, or as an amateur golfer, 2002 Branford Sports Hall of Fame inductee Al Aguzzi, Jr. combined size, strength, quickness, hand-eye coordination, and determination to lead a myriad of teams to successful seasons.  Off the field, tonight’s inductee left a legacy of unselfish community service for all to follow and for many to never forget.

Al was born on May 12th, 1947, and attended Branford High School from 1962 to 1965, where he was a two-sport athlete.  Playing for Branford Sports Hall of Fame coach Dom Cote (1992) during his freshman and sophomore seasons, “Guz” as he was called in high school, was a four-year football letterman.  During his junior year, he was the recipient of the Caesar Palaia Award for the Outstanding Lineman. In his senior year, the team was named the outstanding Class B Team in the state by the Connecticut Interscholastic Athletic Conference.

As a four-year letterman  of the Hornets’ baseball team, Al  played for another Branford Sports Hall of Famer, Gerald Crotty (2000). He was the batting champion in 1964 and 1965 and was selected to the All Housatonic League team both years. “Guz” earned the Bill Savitt Award in 1965.  As a member of the 1965 All-Star Team, Al had the highest batting average (.448). He also was a four time selection to the Little League All-Star team, as a youngster.

At Southern Connecticut State College, Al was a three-year football letterman.  As a defensive lineman/middle guard and offensive tackle, he played for Branford Sports Hall of Famers Ray DeFrancesco (1995) and Joe Farina (1993).  He was a teammate of Bob Tobin (1996).   Al was part of two Eastern Conference Championships in addition to two Co-Championships.  Southern Connecticut head football coach Harry Shay was quoted in the New Haven Register saying: “Al’s versatility is remarkable. He has that rare combination of size, strength, and quickness to blast out opponents and the agility and finesse for other difficult assignments.”  In 1966 and 1967, SCSC played and beat the nationally ranked Maryland State 13-10 and 27-6.  Al played head to head against three linemen  in these games who went on to play professionally.  One such played was NFL great Art Shell.  The victories and scores indicate Al held his own in these games.

Al taught science in the Milford School System for 27 years, first at Meadowside Middle School then at Harborside Middle School.  He helped develop many curricula  and coordinated the Harborside School Net Center – securing guest speakers such as NASA Astronauts.  His gifts in helping students were incredible.  Many of his students included those who other teachers had extreme difficulty.  Colleagues and administrators marveled as to how he got so many of them to become academic achievers and good school citizens.  Many went on to advanced schooling.  At Harborside the tributes upon his passing included a scholarship in his name, the planting of a Memorial Tree, naming the weather station in his honor, and placing an honorary plaque in an area at the school’s front.

Al was a member of the Branford Wetlands Commission, the Long Island Sound Environmental Commission and numerous educational associations.  Sadly, “Allie” passed away all too soon on December 2, 1996 at the age of 49.  In evaluating a person’s life, a most important factor would be how much he or she contributed positively to others.  Al helped so very many and that really is his legacy.  He brought honor and distinction to Branford in many ways and joins his father, Al Sr. (1989) and his brother, Bob (1998) into the Branford Sports Hall of Fame.