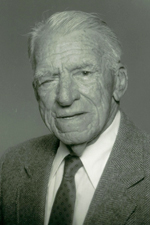 Every athlete has a recollection of where he first began to compete in sports.  On Averill Place in Branford, the Clapp Family’s backyard has baskets on each end where kids plated from sunrise to sunset.  One of these kids happened to be 1992 Branford Sports Hall of Famer, Adolph Mischler.  It was through his dedication and hard work at the Clapp backyard which made Mischler such a talented athlete and allowed him to achieve success in basketball, baseball, and football.

Mischler, a life long resident of Branford, started playing basketball as a freshman at Branford High School.  In his sophomore season, Adolph began his varsity basketball career, but in 1926, Mischler and the Hornets made some impressions against its opponents.  Playing one of the toughest schedules around the state, Branford was 15-9 and claimed a playoff spot in the Interscholastic Championship of the State for the Class C and D teams.  Branford, that season, played Terryville in its playoff game and was beaten by the final score of 23-17.  Mischler, who was the forward on the squad, netted 174 total points, including 69 field goals and 36 free throws, second best on the Branford team.

The following season, Branford was destined for glory.  Never before had a Branford Hornets team been able to win a Housatonic League championship and a state championship all in the same year.  That statement was put to rest in 1927 as the Hornets won 15 games and lost only five, in addition to obtaining two championships.  Branford captured the Housatonic League title with a record of 11-1, losing only to Wallingford 26-10.  In that memorable season, Adolph was the second high scorer on the team with 203 points.

In addition to his basketball career at Branford, Adolph also competed for the football and baseball teams.  The 1926 Hornets football squad relished a 3-2-1 record as Mischler started at the quarterback position and was captain in his senior year.  During the summer of Adolph’s junior and senior years, he played left field for the high school baseball team..

After graduating high school, Mischler attended St. John’s Prep in Danvers, Massachusetts.  Adolph played in the backfield on the football team and was part of the New England Prep School Championship basketball team.  Mischler also enjoyed his running back days playing for the Branford Laurels.

Off the playing field, Adolph served the town of Branford for 25 years in several capacities.

After living on East Main Street for many years, Adolph has established Carriage Hill Road over the last 20 years as his place of residency.  Mischler married former Martha Ham and is the father of three children:  Bill, Nancy, and Jane, as well as being the grandfather of 15 and the great-grandfather of 15.

Known by some as “Misch,” Adolph Mischler pondered what the 1992 induction to the Branford Sports Hall of Fame will mean to him tonight. “Naturally, I feel great about (going into the Sports Hall of Fame).  I think it is some honor that came late in life for Branford players.  We were players that just hated to be beaten on the field,” said Mischler.