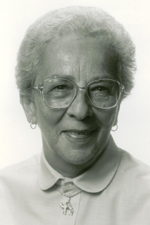 Fast and aggressive.  Those were the words that described Branford Sports Hall of Famer, Adele Weted as she led many Branford teams to a successful season.  A member and co-captain of the Branford High School basketball team, Adele excelled at softball and basketball in the Industrial Woman’s Softball League and in duckpin bowling.

Besides playing basketball in high school, Adele participated on the varsity cheerleading squad before she became involved with the Industrial Women’s Softball and Basketball Leagues.  In 1947, Weted began playing forward and guard on the Tel-Belles Basketball team and led them to city titles in 1947 and 1948, demonstrating her court savvy, swiftness, and shooting skills.  Adele was named to the Gold Star Team, an honorary group which recognized outstanding sportsmanship and playing ability.  In 1948, Weted was named captain of the Tel-Belles hoop squad which through the 1955-56 season had a record of 65-0 in league competition and eight consecutive city industrial championships under the direction of head coach Ed Beazley.

As great as she was in basketball, Adele over shadowed her performance on the court with her hustle on the softball diamond.  In 1947, the Tel-Belles won the softball league championship with 27 consecutive games won in addition to its City Softball Championship in 1947 and 1948.  For eight years, the T-Belles won the City Industrial League Championship and in 1949, 1950 and 1952, Adele was part of the State Industrial Women’s Title.  In its quest for back to back state titles in 1950, the Tel-Belles trounced the Fuller Brush Company of Hartford 20-8 to retain the state championship as Adele and her teammates rallied from a two run deficit to dethrone its opponents.  As a centerfielder, Weted was named captain of the team in 1951 and 1953, succeeding Lois Lyons.  Weted held the all-time record for feminine softball players for playing errorless ball in 35 consecutive games.  Known affectionately as “Jet”, Adele was known as one of the best centerfielders around New England.

Voted the best athlete by her Branford High School peers, Adele rolled her way into duckpin bowling excellence in a National Duckpin Tournament in Newington, Connecticut.  Adele and her doubles partner rolled a 689 series good for third in the state at the end of that particular round.  In the women’s single competition, Weted finished with a 363 series with two other Branford duckpin bowlers – Nellie Selinskas (367 series) and Signe Turbett (341 series).  In 1963, Weted was a member of the winning Connecticut Booster title team in duckpin bowling at Manchester, Connecticut, with team games of 623, 655, and 605.

Now Adele enters the Hall of Fame joining her brother, 1988 inductee Nick Weted, and feels honored to be part of the 1991 Hall of Fame.  She was also inducted into the New Haven Top-Off Club Hall of Fame on November 15, 1989.

“I am very pleased and honored to be nominated.  I think it’s wonderful. When I look back at all the ones that are in there, I almost feel I’m not in their class.  There have been many great people before me.  I think it’s an honor.”