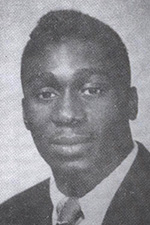 Genuine in his intentions, loyal to his community and devoted to his athletic prowess, 2005 Branford Sports Hall of Fame inductee Addison Long is remembered as a key contributor to the community in many aspects of life.

Tonight’s inductee was a three sport athlete while at Branford High School from 1948 t0 1951, excelling in football as a back, in basketball as a premier ball-handler and as a baseball standout at third base.

As a member of the Hornet’s football squad, Addison was a four- year member on the varsity squad.  He played alongside fellow Branford Sports Hall of Famers Joe Chandler (1990), Vincent Casanova (1998), and Bob Vishno (2001).  Addison’s claim to fame in his first season came on the junior varsity team. While taking on East Haven, tonight’s inductee scored the winning touchdown of its first game versus East Haven.  Despite losing all of the first string from the pervious season, Branford developed its second unit into a tough foe for their opponent to handle.  During the varsity season, Addison excelled on the defensive line for the Coach Warren Sampson- led team.    In his senior season, Addison helped lead the Hornets to a 4-3-1 record and played alongside other Hall of Famers, including Pete Ablondi (’92), Joe Paul (’93), Robert Massey Sr. (’94), Russell “Butch” Gordon (’94), Lou Locarno (’96), and Blake Lehr (’97).

During the 1949 basketball season, Addison contributed to the Hornets 13-6 record, which included a tournament win versus Windsor High School in the C.I.A.C. play down game, by the final score of 66-38.  The team would eventually fall to Sacred Heart, 41-38, in the quarterfinals of post-season play.  As a senior and captain on the 1951 team, the Hornets posted an impressive 14 – 5  record, including a 10-2 league record, a victory over the defending Class B Champion, Stonington (47-46), a court win over East Haven for the first time in four years by the score of 51-36 and a 64-62 decision over Lyman Hall to successfully hurdle its last obstacle to the Housatonic League basketball crown.  In the Class B Tournament, Branford was edged out by Woodrow Wilson, 57-56, however Long had a great season, scoring 108 points, fourth best on the team.

Following graduation, Addison served in the United States Army until his discharge in 1955 ,where he was employed at the Malleable Iron Factory as a construction worker