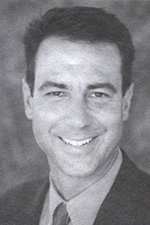 Valiant. Dauntless. Propitious. Devoted. Those are just some of the superlatives which best describe 2005 Branford Sports Hall of Fame inductee James Petela, as a stellar basketball player, an outstanding educator, and as an inspirational role model to the town.

A life-long Branford resident, tonight’s inductee was a dominant force on the Branford High School basketball team from 1978 to 1981. As a sophomore and as a starter on the varsity team, Jim became one of the top scorers in the Housatonic League, scoring 356 points in Branford’s 14-6 season of 1978-79.  He averaged 21 points per game, made the All-Housatonic League team and recorded a free throw percentage of .910.   Jim’s selection to the All-Housatonic League team marked the first time a sophomore was awarded a spot on the team in league history.

The following year, Branford recorded an 18 – 3  season and Jim once again drew team and individual honors.  During the season, he averaged 25 points per game and averaged .910 from the free throw line.  He was named to the All-State team as a guard/forward, captured a spot on the All-Housatonic League team  and earned a place on the Q-House New Haven Festival All-Tourney Team.  Playing for the legendary coach and fellow Branford Sports Hall of Famer, Tom Murray (1992), Jim was a key contributor in Coach Murray’s 200 career victory that season.

In his senior year, Jim co-captained the Hornets with Dave Santos to the Housatonic League title. Not only was he named to his third consecutive All-Housatonic League first team, second consecutive All-State First Team and Q-House New Haven Festival All Tourney team, but he was selected to the Converse All American team. Jim averaged 26 points his senior season and held the Branford High School career scoring record of 1,399 points.

After graduation from Branford High School, Jim attended Yale University from 1981 to 1985 and played on the Yale varsity basketball team for two years. He was named Co-Ivy Rookie of the Week 3 times during his freshman season and played for coaches Ray Carazzo and Tom Brennan.

Following his graduation from Yale, Jim returned to the Branford community and coached boy’s basketball at the Walsh Intermediate School, the Branford High School freshman team, and later the Hornets junior varsity team.   He taught social studies and coached soccer, junior varsity basketball and girls’ tennis at Hopkins and while a teacher at Hamden Hall, he led the boy’s varsity basketball and girls tennis teams.  Currently, tonight’s inductee is in his 12th year teaching AP United States History and Worldviews/Philosophy/Religion at Branford High School and was nominated three consecutive years for Teacher of the Year.  Jim is the founding father of the Model Congress Program, now in its 12th year. He is  Co-Director of the St Mary’s Church Confirmation program comprised of over 100 plus freshmen and sophomores.  For over 20 years, Jim has been a Park Supervisor at Foote Memorial Park with his parents Mary and Stan.