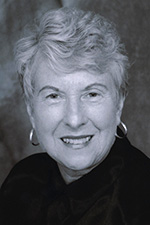 Her outstanding quality of leadership, her genuine portrayal of sportsmanship, and her superior  demonstration of athletic ability were just some of the traits that made 2006 Branford Sports Hall of Fame inductee Geri Spadacenta a stellar individual to the Branford community.

Born in New Haven, Connecticut on March 11, 1938, Geri attended Branford High School and played basketball, field hockey and volleyball. Under the guidance of 1990 Branford Sports Hall of Fame inductee and coach, Virginia Moessmang, Geri   was also a four-year member of the Varsity Cheerleading Squad and, was named captain in her senior year.  In her freshman season, Geri was part of a successful basketball squad, which finished with a 4-1-1 record, defeating Hamden Hall (37-6), Portland (33-22), St. Mary’s (24-22), and Guilford (23-16).  During that year, she was a teammate of past inductee Georgette “Tootsie” Laske (Class of 1999).  As a senior, the Hornets enjoyed an undefeated season, and for her achievements, Geri was given the Girl’s Sweater Award for outstanding qualities of leadership, sportsmanship, school spirit and athletic ability.   Off the playing field, tonight’s inductee was a valuable member of the student body.  She actively served on the Dance Committee, the Horizon Club, and as an usher in her sophomore year for the Shamrock Follies, the Junior and Senior Plays. In her senior year, Geri was a member of the Class Book Committee, the Class Sports Editor for the 1956 Milestone and was voted “Most Athletic” by her classmates and “Outstanding Youth of the Year” by her teachers.

Presently employed at the Yale School of Management for 20 years as Senior Administrative Assistant, Geri has worked in the Dean’s office for seven years and secretarial support for eight faculty.

In the community, Geri held the position of President of the Annex Little League Auxiliary for five years and coached the St. Stanislaus Church (New Haven) majorettes for two years. She was a nine-year member of the East Haven High School Gridiron Club and held several positions while both her sons played.  She was also president of several PTO’s in East Haven and held the office of President for the PTA-PTO Presidents Counsel for a few years.

Residing in Branford, Geri is the daughter of the late Mary and Walter Kaczynski and the sister of Walter, Helen (Stopka), and Ted, a member of the Branford Sports Hall of Fame (class of 1999).  She is also the mother of three, a daughter, Anna Marie (Raccuia), and sons Paul, and Pat and the grandmother of seven.