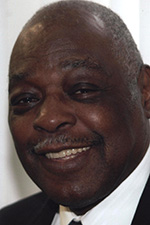 In the athletic arena, he enabled those around him to persevere and succeed.  In the classroom, he set a standard for commitment and excellence.  In the law enforcement profession, he established a formidable example of professionalism and leadership for others to follow.  2006 Branford Sports Hall of Fame inductee Bob Gill has fostered the development of teamwork, success, and a strong sense of community in everything he has embraced.   He has earned a reputation as a wise and fair-minded leader.

During the 1950 season, Bob was an up-and-coming force on the Hornet’s basketball team.  As a member of the junior varsity team, Bob was labeled as one of the “stars of the future”, according to the 1950 Milestone Yearbook.  About Bob and his classmates, the Milestone recorded, “Their future in basketball should be a very successful and happy one, for they have such admirable traits as optimism, stick-to-itiveness and sharp competitive attitude.”

After graduation, Bob entered the United States Army for basic training at Fort Dix, New Jersey and shipped out to Korea in 1954, attached to the 55th M.P. Company.  He served overseas the following year, earning the rank of corporal. He became a part-time police officer in Branford in 1962 and joined the force full- time in 1964.  During 44 years of service, Bob has served as a patrol officer, patrol sergeant, patrol lieutenant and was deputy chief for 20 years. He was appointed the ninth chief of the department on March 28, 1998.  Chief Gill graduated from the University of New Haven with a bachelor’s degree in 1975 and a master’s degree in public administration in 1981.  He is currently the longest serving officer on the force.

Bob has given unselfishly his leadership, time and energy to many clubs and organizations including the George Washington Carver Club, the Branford Human Rights Council, Board of Directors of the Urban League Greater New Haven (1990-1995), Connecticut Chiefs of Police Association and the Branford Rotary Club.  Tonight’s inductee is also involved with the International Association of Chiefs of Police and National Organization of Black Law Enforcement Executive.  A life-long member of the St. Stephen’s A.M.E. Zion Church, Bob is president of the Carrie P. Chandler Housing Development Corporation.

Bob Gill resides in Branford with his wife, Dorothy, and is father to son, John, and daughter, Roberta.  He is the grandfather to Jermaine, Jason, Jerrell, Tevin and Kyle and the step grandfather to Skyler Phelan.