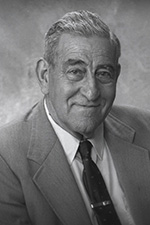 As a star athlete on the football field, an outstanding soldier in the United State Army and as a dedicated worker for the Southern New England Telephone Company, 1997 Branford Sports Hall of Fame inductee Vincent P. Raiola provided many great memories to the town of Branford, and left an accomplished lifestyle for many young people to follow and admire.

Born on March 5, 1918 in Branford, Vin attended Branford High School, graduating in 1935.  While there, he played football and was a starting center, linebacker, and defensive tackle for the Hornets during his varsity playing days.  Tonight’s inductee played with Branford Sports Hall of Famer Pete Naimo (Class of 1992) and Henry “Hank” Lacroix (Class of 1994) and  was coached by 1988 Hall of Famer Johnny Knecht Jr.  One of the most memorable victories came in Vinny’s senior season, where a favored Commercial team went down in defeat on Thanksgiving day, 12-6.  In that contest, Branford uncorked a fine passing attack, a sturdy defense, which Vinny was a part of, and a satisfactory conclusion to his senior season.

Following high school, Vinny played football with the Branford Laurels from 1936 to 1937.  In his first season with the team, he contributed to 3-3-2 record.  The season provided excitement to the Branford faithful since the team was formed late in the season after a pervious decision to have no club, had drawn local players to play on other teams.  During the 1937 season, Vinny played with 1990 Hall of Fame inductee Harry “Heb” Williams.  Lining up at left guard as a starter for the Laurels, Vin helped the team to a 3-3-1 record.  It was during this season that Vin played under coach and Hall of Fame inductee (Class of 1989) Stu Clancy.

After playing two seasons with the Wallingford Walcos after a threat of a Branford Laurels break-up, Vin went into the military at Camp Edwards, Massachusetts, where he played football.  He was the captain and Most Valuable Player of camp Edwards Team, as he made seven tackles, intercepted two passes and blocked and recovered one kick in the New England Military Championship versus Fort Terry, New York in a game played at the Yale Bowl on December 6, 1941.  On a weekend pass, Vinny played with the Branford Laurels on December 7, 1941 against the Hill Triangles of New Haven, when the game was interrupted by officials to inform spectators of the Japanese attack on Pearl Harbor.  All military personnel wee ordered to return to their bases.

While in the military, Vinny earned seven battles stars, two Presidential Unit Citations (United States and Philippines Government), was recommended for Silver Star for saving the life of a badly wounded comrade in spite of heavy enemy fire and was awarded the Bronze Star for Valor.  He was discharged as First Sergeant in July of 1945.

Vincent returned to play football in the Connecticut State Pro League for the New Haven Annex during 1945-46 season.  He moved on to compete in the New England Pro League with the Colony Club, which played the best pro and semi-pro teams in New England.  In addition to football, tonight’s inductee also played recreation basketball and softball before ending his athletic career in 1949.

After retiring from the Southern New England Telephone Company in 1979 with 33 years of service and receiving the East Shore Sandlot Golden Football Award in 1994, Vin is pleased to accept induction into tonight’s Branford Sports Hall of Fame.  “Many nice things have come my way in the last 79 years and this award  ranks among the best.  To be included with the sports honorees of previous years is a great honor,” said Raiola, who is married to his wife of 50 years, Stacia, and the father to children, Rick, Becky, Tom, Joseph, and grandfather to Rebecca Maria.