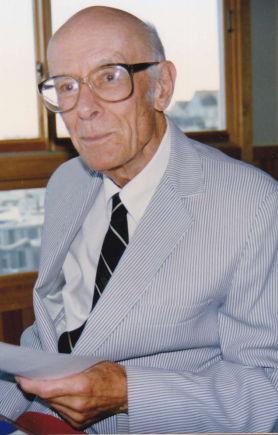 Sidney W. Noyes Jr. was born in Portland, Maine in 1910. Fortuitously, his mother refused to allow her four sons to play football so they turned instead to golf, especially when the family moved into a mansion adjacent to the storied Ardsley Golf Club. Noyes started winning at golf early in life. In 1924, at the age of fourteen, he won the second flight of the Maine Amateur Championship and, three years later, took the first flight of the Championship as well as the New York Metropolitan Golf Association Junior Championship and the Westchester County Junior Championship. He repeated both championships the next year, in 1928, and made his initial foray into the US Amateur Championship.

As a student at the Hotchkiss School, Noyes won the Interscholastic Golf Association Championship. In the first qualifying round of the 1930 US Amateur Championship at Merion Cricket Club in Ardmore, Pennsylvania his score of 70 left him just one shot behind the leader, Bobby Jones. Jones stopped by Noyes’ locker to congratulate him on his fine play and wish him luck in the second round. Noyes followed his 70 with a 77, easily qualifying for the championship, but lost in the second round of match play. Jones shot 69-73 to lead the qualifiers and went on the win the match play title to complete the grand slam.

Noyes entered Yale in the fall of 1929 and, as a bulldog, earned three major “Y” letters by playing consistently in medal play qualifiers, taking second place in the 1931, 1932, and 1933 National Intercollegiate Championships. His performances helped Yale win all three team championships. His best match play was in reaching the 1932 semifinals before losing to J. W. Fisher of Michigan, the eventual winner.

Noyes qualified for match play in the 1932 US Amateur at Five Farms in Baltimore, only to lose in the second round. He qualified again in 1933 at the Kenwood Country Club in Cincinnati, Ohio, shooting a four-under par 31 on the final nine. He advanced to the quarter-finals, losing on the thirty-eighth hole. In the 1934 US Amateur at The Country Club in Brookline, Noyes reached the third round of match play, even though he was now working for Manufacturers Trust Co. in New York and had little time to practice. The same year, Bobby Jones invited him to what was to become the Masters, but Noyes reluctantly declined, given the demands of his job.

The year 1935 was perhaps Noyes’s best year. He qualified for the 1935 US Open Championship at Oakmont in Pittsburgh. He won the Green Meadow Country Club Invitational and again won the Maine Amateur Championship.

Noyes married Clare Smith of Pine Orchard, Connecticut that same year, and golf gradually became secondary to family and work. In 1936, he qualified for his last US Amateur. His golfing career was interrupted by military service in World War II. His later competitive golf was limited to state and local club events. At the Pine Orchard Country Club, he won many club championships. He not only carried the laurels of being the top golfer in the area, but was recognized as the classiest sportsman in the region, a man who was highly respected as a gentleman.

Noyes lived in his beloved Pine Orchard until his death in 2003. He was president of the Alden M. Young Company and, exercising his love of nature, was responsible for many of the conservation programs in Pine Orchard and the eventual donation of Young’s Pond Park to the Town of Branford.