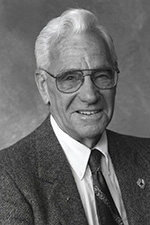 Opponents of the Branford High School football and baseball team in the late 1940’s feared facing the Hornets on their schedule and in particular, one speedy, talented, and determined athlete in 1997 Branford Sports Hall of Famer Richard “Dick” Jackson.

Born on May 3, 1928, Dick attended Harbor Street and Laurel Street Schools before attending Branford High School, where he played football as a halfback, and defensive end, and played baseball as an infielder, and as a centerfielder.  In his freshman year (1944), he was expected to be an integral part of the Class “B: Championship baseball team, when a broken collarbone, sustained in preseason limited his action until the last game of the season.  Branford won only two of its first six games, but Dick rallied in the second half of the year to help the Hornets capture a state crown with teammates and fellow Hall of Famers, 1989 inductee, Joe Orsene, and 1997 Hall of Famer Ken Erickson.

In his junior year, Dick helped lead the baseball team to a Housatonic League runner-up spot, as the Hornets won six of its first eight games that year.  Dick played center field and competed with 1995 Hall of Fame inductee Jim Murphy and 1993 inductee Bill Mischler, and was coached by the legendary Warren Sampson, yet another Hall of Fame inductee (Class of 1992).  In 1946, tonight’s inductee was a halfback for the Hornets football team, which was entering only its second year of football, after a lapse of a number of years.  That year, Dick was added to form one of the Hornets fastest and shiftiest backfields in the history of Branford football.

Dick went into the United States Air force where he played baseball for the service team in Bainbridge, Maryland, and played with Hall of Famer Stan Musial.  Following his service duty, he attended the Junior College of Commerce, now known as Quinnipiac College, where he also played baseball.  As a semi-pro athlete, he played for the Branford Laurels in 1948 and 1949, and the New Haven Roesslers in 1949 and 1960.  Dick was an all-star on the Fallmouth, Massachusetts Football team, and later played baseball in the Shoreline League for the Branford Townies and Madison, before playing in the New Haven Industrial League for American Steel and Wire Company.  Through out his baseball career, he never hit under .300, Dick was a great bunter with speed, and excelled in the field with this glove work.

Dick joined the Connecticut Department of Transportation in 1952, and worked there until his retirement in 1979 as a Supervisor.  Married to his wife, Marguerite (Peg), he is the father to daughter, Diane, and sons, Richard, Donald, and Douglas.

“It is a great honor to be recognized by the town in the Branford Sports Hall of Fame.  To be brought up in the town and to play athletics in the town was a tremendous opportunity for me,” said Jackson.